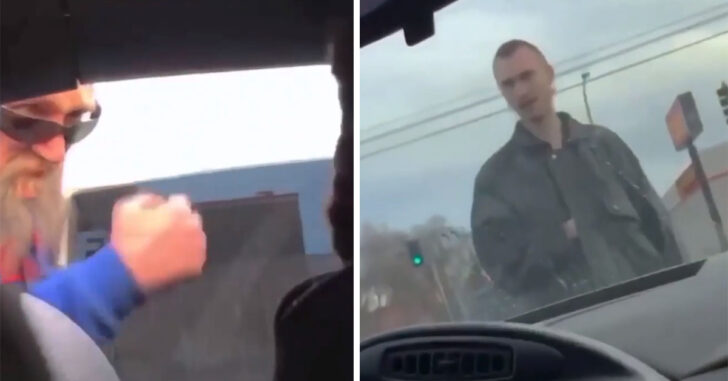 2020 isn’t over yet, and there are many people out there who are having to deal with even more insanity than the average person.

A video clip has been going viral again, that shows a family inside of their vehicle, at first being confronted by a woman who says that the car is hers, and asks how they got the car.

Others join in, and it’s possible that they either A) were with the woman, or B) were bystanders who believed the woman.

In either case, multiple people surrounded the vehicle, even banging on it and opening the back door where the children were.

This incident occurred in early March of this year.

The man driving gets on the phone with 911 to try and get help, and he has a lot more patience that I would have.

At one point, a man appears in front of the vehicle and places his hand under his jacket, as if he’s reaching and holding onto a firearm and ready to draw. If no other time was ‘GO’ time, this was it. I would have hit the gas and got to a safe location, whether or not that man was still in the way.

The man on the motorcycle may have been a witness and thought that the vehicle really was stolen. Still, I wouldn’t approach a person who I think just stole someone else’s car. If anything, I’d call police and possibly follow them from a distance. Possibly.

It gets crazier from there, and you can view the video below.

Place yourself in this man’s shoes and ask the question: At what moment, if any, would you have either: A) Drove forward to get away, and/or B) Draw your firearm.

Arm yourselves and prepare to protect yourselves out here. Because only the element of preparation 💥💥💥💥💥 will fend off this level of HATE & EVIL… #USorELSE✊🏽