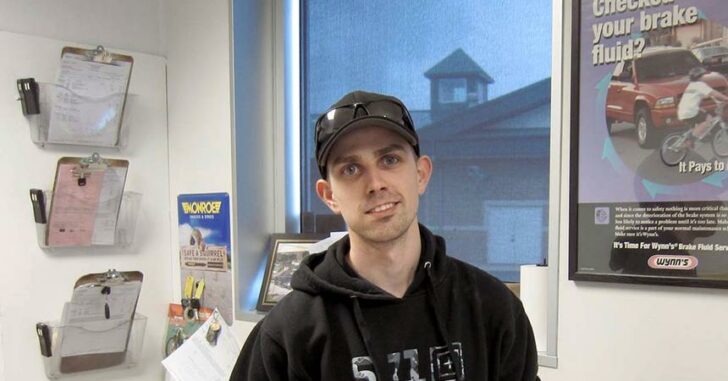 Chance Morman has had his North Dakota concealed carry permit for about a year, and he hoped that he would never have to draw his firearm in self-defense. That all changed on Saturday while he was working his shift as the manager of a Meineke Car Care Center.

While Morman was in the back of the shop with other employees, a man came in the front door in what at first seemed to be an ordinary customer. The man’s back was to Morman when he approached to to see what he needed help with. That’s when the man turned around and Morman could see that he was holding something under his hoodie.

“That’s when he said, ‘Give me all the money before I blow your [expletive] head off,’ ” Morman said.

It was at this time that Morman made the decision to draw his Smith & Wesson M&P40 from his Bianchi IWB holster. Morman said that as soon as he presented his firearm, the man got “a blank look on his face” and wasn’t quite sure what to do. When the robber realized that he was being faced with an actual firearm, he slowly turned around and walked out of the shop.

Police identified the man as 32-year-old Eugene Fredrick Quinnett, who was picked up shortly after the incident.

We spoke to Morman via Facebook and when asked how the store owner felt about his actions, he told us that the owner showed support and that he is also a big supporter of the 2nd Amendment.

Quinnett was sent to jail on suspicion of criminal trespass and robbery with threat of a weapon.

I asked Morman, after having time to look back at the incident, if he would have done anything differently. “Not a thing,” he replied.

“Realistically, I don’t want to have to take somebody’s life,” he said. “But like I say, if it’s mine or theirs … I’m picking me, every time.”