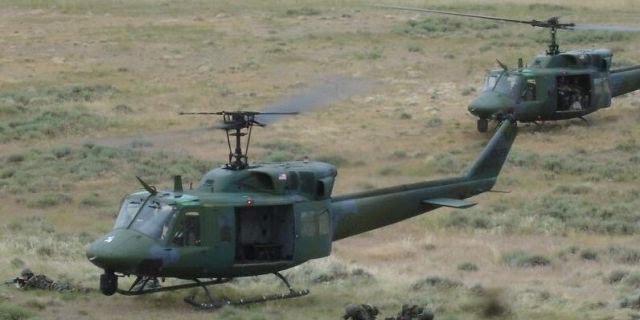 A crew member inside an Air Force helicopter was reportedly shot from a bullet coming from the ground as they flew at roughly 1,000 feet.

An Air Force helicopter was forced to make an emergency landing at a Virginia airport Monday after someone shot at it, injuring a member of the crew, local and military officials told McClatchy.

The UH-1N Huey helicopter is assigned to the 1st Helicopter Squadron at Joint Base Andrews. It was flying about 1,000 feet off the ground, about 10 miles northwest of Manassas Regional Airport when the incident occurred, the Air Force said in a statement.

The injured crew member was taken to the hospital and has been treated and released.

The helicopter made an emergency landing after the incident.

The FBI is investigating.

The bullet came from the ground, and they aren’t sure who fired the shot. If they ever find out, that spells very bad news for the person responsible.

It’s nearly impossible to believe that the shooting was negligent, and was likely on purpose. If it had been a ‘warning shot’ for a separate incident, then the person who pulled the trigger is extremely unlucky.

Chances are that it was on purpose, and we can only hope that the person responsible is caught and will face charges for this terrible decision.