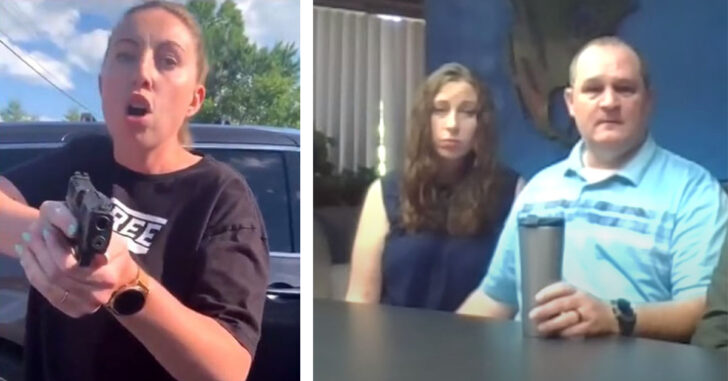 An incident outside of a Chipotle restaurant earlier this month went viral after video was shared across social media which showed a part of the confrontation.

It was a heated exchange between a white woman and a black woman and her daughter ended with a gun being pulled after the white woman apparently bumped into the woman’s 15-year-old daughter and wouldn’t apologize.

I’m not making this a race thing. One of the parties involved already did this from the get-go.

In videos posted to Twitter and YouTube, the armed woman is pointing a pistol at the mom and yelling “back the f**k up!” The mom holding the camera can be heard saying to “get the license plate” and asking for the cops to be called.

The heated exchange appears to stem from when the white woman bumped into the mom’s daughter as they were entering the restaurant. After the mom asked the woman to apologize, the disagreement brewed into a shouting match before a firearm was drawn.

A portion of the incident can be seen in the video below.

On July 2nd, an announcement was made that charges were filed against the woman with the gun, as well as her husband who was with her.

Oakland County Sheriff Michael Bouchard held a news conference Thursday afternoon to address the case. He shared the videos and six different 911 calls. Bouchard said two people — the driver and passenger of the minivan shown in the videos — were arrested and are facing felonious assault charges, a four-year felony. They remained in custody Thursday and were expected to be arraigned in the afternoon.

Now, new information is out and it’s coming from the party with the gun. Our friend John at Active Self Protection was able to sit down with the woman, her husband and their lawyers for a nearly hour-long interview to get more details of what happened from their perspective.

If you’ve got an hour, the video below is worth a watch, especially for armed citizens.

Previous article: 2 Dead 1 Injured: Gun Enthusiast Shoots 3 Armed And Violent Home Invaders One-By-One, Armed Neighbor Comes To Help Next article: California Wants You To Hold Their Beer: They're About To Release An Additional 8,000 Prisoners Due To Coronavirus