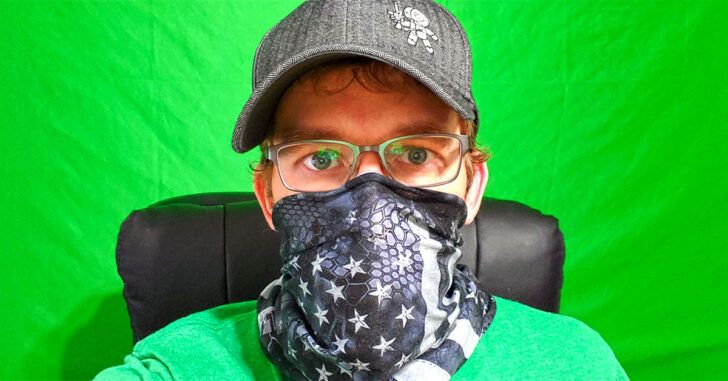 “Wearing a face covering in public places or when working. Any individual who is over age two and able to medically tolerate a face-covering (a mask or cloth face- covering) shall be required to cover their nose and mouth with a face-covering when in a public place and unable to maintain a six-foot social distance. Face-coverings are required in public indoor spaces such as stores.” [Emphasis added.]

Pritzker’s new order requiring masks poses a real risk for good guy gun owners and here’s why: wearing a mask while in possession of a firearm puts gun owners in dangerous territory under Illinois law.

(a) A person commits the offense of unlawful use of weapons when he knowingly:

(9) Carries or possesses in a vehicle or on or about his or her person any pistol, revolver, stun gun or taser or firearm or ballistic knife, when he or she is hooded, robed or masked in such manner as to conceal his or her identity;  [Emphasis added]

Violation of Section 24-1(a)(9) is a Class 4 felony in the Land of Lincoln. And a felony conviction makes one a “prohibited person” under both federal and state law. Prohibited as in felons can’t (lawfully) possess firearms in most circumstances.

Looking at this practically, it seems that the reasonable person doctrine would suggest that someone seeking to comply with the governor’s order by wearing a medical mask during this pandemic would have no intent “to conceal his or her identity.”

Sadly, though, sometimes a “reasonable” interpretation can prove as elusive as “common sense” when it comes to government officials with an agenda.

Regrettably, not every police officer and prosecutor in Illinois shares our views on the proven benefits of good guys with guns at home, much less carrying them in public.   Someone like Cook County’s State’s Attorney Kim Foxx might well use the mask prohibition statute to pursue a prosecution against a card-carrying good guy (or gal).  Because Kim Foxx seems to have plenty of spare time given her tendency to give career criminals and wife beaters a free pass.

Clearly, the Governor and his advisors are supposed to be the wizards of smart when it comes to the rule of law and his job as chief executive. It’s a shame the Governor failed to contemplate this potential risk to gun owners.

Or maybe he did. Because plenty of skeptical people think the Governor has no problem creating a legal bear trap for gun owners. “Let no crisis go to waste,” some of Pritzker’s political pals are famous for saying.

And it’s not just concealed carry licensees carrying in public who could be in jeopardy. The same law applies to people possessing firearms at their fixed places of business for security. Or even carrying guns on their own private property for personal safety.

Gun owners shouldn’t need to rely on an officer’s discretion to avoid a felony charge.

Previous article: 5 Tips For Traffic Stops; What To Do If You Get Pulled Over While Carrying A Firearm Next article: 4 Incredibly Important Tips For Concealed Carry Beginners