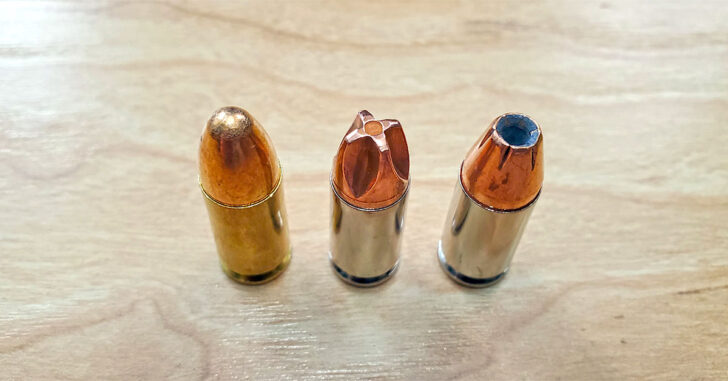 There are a lot of different types of bullets out there.  In a self-defense situation, some bullets can give an advantage over others.  With each pro, there’s usually a con.  And in the bullet family tree, every round is related by at least a first or second cousin.  In this article, we’ll go over a few of the different types of ammunition available.  We can’t cover every single type, but we will try to cover the most common varieties.

Full metal jacket (FMJ or FMC) refers to the copper or steel alloy coating on the bullet to reduce lead residue left in the barrel after firing. These rounds are reserved for the range, as they are cheaper in cost and not meant for self-defense.

Hollow point rounds have a hollowed out center.  When a hollow point strikes its target, the hollow causes the bullet to deform.  It looks like a mushroomed gob of lead pushing through.  The results are devastating.  Because the bullet expands inside the soft target, it pushes out a larger surface area of tissue.  The jacketed version has a thin covering of copper or steel, like the one seen above.  This means less lead powder coating the inside of the barrel.

This is ammunition made with a higher pressure than the standard rounds of its caliber.  The end product is faster muzzle velocity and greater penetration.  Some handguns deal with the added stress of over-pressurized ammunition quite well.  Others may malfunction. With any ammunition, you should always run some through your firearm to make sure it works as intended.

CONS:  Greater stress on the barrel and other parts of the firearm.

Related:  JHP+P+ – Overpressurized Jacketed Hollow Point is a combination of a jacketed hollow point’s increased damage to soft tissue with the increased velocity and penetration of a +P round.

This is a bullet with an exposed lead up.  It can also sometimes be called a “partially jacketed bullet”.  Unlike a full metal jacket that completely encases the bullet in a coating of metal alloy, the soft point leaves a portion exposed.  This causes it to expand upon impact – creating a greater surface area.  It also fouls up the barrel of a firearm less than non-jacketed bullet.  JSPs are considered a good middle ground between a hollow point (HP) and a semi-wadcutter (SWC, below).

This type of bullet has a blunted tip.  It’s typically favored in .38 snub-nose style revolvers.  Where a rounded tip would slide through a target, the flat tip (“meplat”) punches a big hole.

In the middle of these broad categories are a number of really good styles of ammunition.  One of which is Hydra Shok.  It’s a proprietary type of ammunition made by Federal Cartridge.  It’s a partially jacketed hollow point with a center post in the middle.  To exposed soft tissue, it’s characterized by a deep wound channel.  Hydra Shoks are more of a hybrid animal.

Another example is the Xtreme Defender round offered by Underwood Ammo. That’s the one in the center in the above image. This round is not in any category above, but is a very effective round for self-defense.

What type of bullet works best for your self-defense?  A lot of shooters use JHP+P to get some extra penetration out of their hollow points.  Some prefer the slow muzzle velocity but big punch of an SWC.  For practice at the range, stick with FMJ.

What’s in your magazine?

Previous article: Homeowner Shoots Burglar That Broke Into House, Then Tried To Steal Car Next article: [VIDEO] Teen Shoots 2 Of 3 Armed Home Invaders, One Runs Next Door Crying For Help