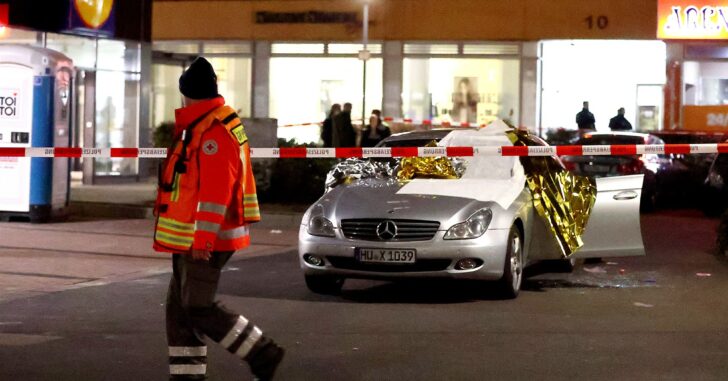 HANAU, GERMANY — The attacks happened around 10pm Local time in the town of Hanau, near Frankfurt. The location of the attacks were two local Hookah bars. After the suspects killed three people at the first bar they fled the scene to another Hookah bar nearby. At the second location they killed five more people. In addition to the 8 fatalities, there were five other shooting victims.

At this very moment armed police are still searching the area for the suspects. They have even begun going door to door in certain neighborhoods. Forensic experts in white overalls can be seen at the crime scene collecting evidence as the manhunt continues. Right now, however, there are no descriptions of the suspects, only that they drove away in a dark colored car.

The attacks appear to be a planned and coordinated effort. Witnesses say at the first shooting, one of the gunmen rang a bell which prompted the other suspects to cease firing and flee the scene together. A short police statement gave no information on the victims and said a motive was not immediately known.

Hanau has a population of about 100,000 people. It is located in southwestern Germany, about 12 miles east of Frankfurt. Police from neighboring Bavaria have been deployed to help their local colleagues in the manhunt effort.

A truly terrible evening for the people of Hanau. Our condolences go out to the families and friends of the victims. Our thoughts also go out to the local law enforcement, as they have a very dangerous job ahead of them.

Previous article: How Many Seconds Does It Take For Your Day To Take A Turn For The Worst? In This Case, About 3 Seconds Next article: Austin Homeowner Kills Two Home Invaders, Wounds One (When You Cut Through the Narrative)