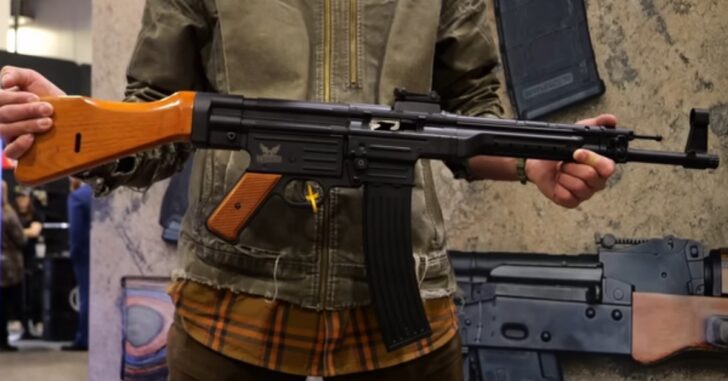 Palmetto State Armory’s at it again.

The same company that brought us the Rock and Dagger is taking a leap into yesteryear with a replica of the German-made STG-44.

It’s part of what’s being called the Battlefield line, which is PSA doing what a bunch of history nerds have been hoping for for years.

PSA appears to be creating this line with the intent to make affordable iterations of classic firearm designs from military history available to all — and not just to hang on the wall.

“[The Battlefield line] is new production stuff that, while iconic, you want to go out and shoot it and not feel bad about dropping it or, you know, putting crap ammo through it and maybe hurting it and then being able to get spare parts, which is kind of key,” Everett “Mac” Steil, one of Hill & Mac Gun Works’ two co-founders, told TFBTV.

You can check out the interview, and far more importantly, the rifle, below:

This isn’t some iteration of the old “make a classic firearm cheap by making it .22lr” plow, either.

This firearm will reportedly be available in 5.56/.223, .300 Blackout, 7.62x39mm, and, astonishingly, 7.92mm Kurtz, the round the firearm was originally chambered in. There will also reportedly be a 5.56 adapter available for the firing of blanks for those reenactors out there.

Not only that, but users will reportedly be able to change cartridges with the change of a barrel, magazine, and bolt.

To say that PSA’s swinging for the fences with this product is probably an understatement, at this point.

YouTube commentors on the above video seem to agree.

“If these actually wind up in people’s hands and work decently, it will make PSA the coolest company in the industry for the next hundred years,” wrote one.

Another said that “I keep telling people PSA is the only firearms manufacturer taking risks to bring innovative new and cool firearms to market. I’m buying one of these. So amazing.”

Prices haven’t been announced yet, according to Free Range American, “[Steil] could only say that it would cost more than the pre-order version from HMG, which was priced at $1,799.99 and $1,959.99, depending on options.”

These firearms will reportedly begin to become available this year, but as always, there’s no guarantee yet. Even when it does become available, I’d be willing to be that wait list will be significant.