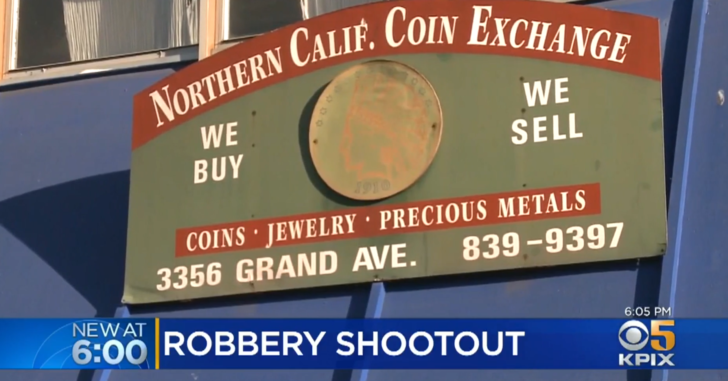 OAKLAND CALIFORNIA — The famous “Four Rules of Gun Safety” exist for good reason. Unfortunately, not everyone follows those rules; especially criminals when they are trying to flee a crime scene. This shootout between a coin store owner and a pair of robbers shows just what can happen when bullets are flying carelessly in public.

“After they were gone, I realized what just happened. I grabbed my gun and went after them …. and I saw one of the guys still on the street around the corner there ,” said Mammoser. “And I told him, ‘Hey, stop!‘ And I had my gun and I point it at him. And he turned around, and shot at me, so I shot at him twice.”

Just then, the second robber drove up in a car, and the gunfire continued.

“He’s shooting at me, and I shot at him,” said Mammoser. “And hit his car. I don’t know what I hit. And I’m told that he hit the window next to me, and he hit somebody.”

Mammoser, the shop owner, buzzed two men into his store who immedietly drew their guns on him. In total, they stole about 100 pounds of rare silver coins. It wasn’t until they left that Mammoser had a chance to react. Unfortuantely, he did not act in the most responsible manner.

Mammoser ran out of his store with his own weapon drawn, looking for the men who just robbed him. Upon spotting one of the robbers out on the street, Mammoser threatens him with his gun. Instantly, a shootout begins on the street at 10am in the morning.

The other robber, who is now in a car, drives up and joins the fight. In the midst of this threeway shootout, a stray bullet goes through a nearby window and strikes a man inside. Fortunately, the man inside was not fatally wounded and will live.

So what did Mammoser do wrong? Well first, he shouldn’t have gone after the robbers with his firearm. The crime was committed and the robbers left him unharmed. To go after them with a gun makes him an aggressor, and puts himself and others in unnecessary danger.

Secondly, he participated in a gunfight on a public street in front of other residential homes. Police are still considering pressing charges against Mammoser for his actions.