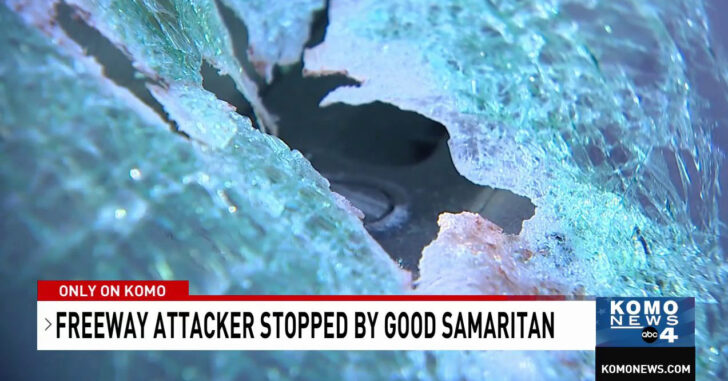 EVERETT, WASHINGTON — Incredible story out of the state of Washington that involves a lunatic attacking drivers with heavy objects, a concealed carrier holding him at gunpoint, then a bare-knuckle brawl to finally subdue him.

Washington State Patrol says 41-year-old Jeremy Yates of Marysville was standing on the shoulder of southbound I-5 by Pacific Avenue. Investigators say he damaged as many as 10 cars around noon when he hurled chunks of concrete, rocks, wooden blocks, metal pipes, and even a trailer hitch at drivers on the freeway.

“I drew my pistol,” Jacob said. “I aimed it at his head because as I got closer to him, he still had this chunk of metal in his hand. I said several expletives at him, told him to get on the ground and he was under citizen’s arrest. As I ran up to him, he dropped. He dropped the metal. I went to the ground with him. As I went down with him, he jumped up and wanted to fight my father who was behind me.”

He came up to help me out. I gave my father my pistol and I went toe-to-toe with the guy.”

One of the drivers explained that the crazed man, Jeremy Yates, was using a trailer hitch to smash in her front window, and then tried to get into her car. That’s when our pistol packing good Samaritan (Jacob) showed up. He drew his firearm and ordered the man to the ground, hoping to hold him there until police arrived.

Jacob got on the ground with Yates to further restrain him, and then Yates jumped up and went after Jacob’s dad. That’s when Jacob gave the gun to his father, and handled Yates the old fashioned way – with his two fists. Jacob finally managed to get Yates away from the highway when police arrived and arrested the man.

Police would later say that they have a history with Yates, and had Jacob not been there to stop him that Yates would have continued his path of destruction; possibly seriously injuring or killing someone. What Jacob did was an incredibly brave act that very likely saved someone from serious injury or death.

Jacob showed incredible restraint and good technique. He used his firearm to try and keep Yates in place until police arrived, when he realized that wasn’t going to happen he had to make a call; shoot the man or try to physically dominate him.

Jacob seemed confident that he could physically handle Yates and gave the gun to his dad – just in case. Jacob was able to subdue the man physically and no one had to be shot that day.

Previous article: Things That Shouldn't Be A Thing: Negligent Discharge While Hiking Up Pants Next article: With Her Daughter Alone And In Danger, This Armed Mom Didn't Wait For Police To Handle Intruder