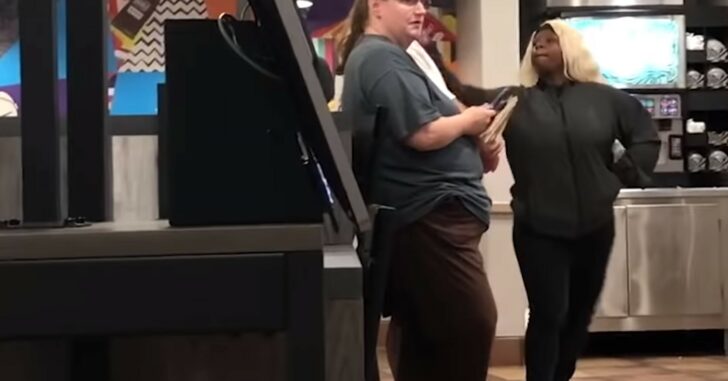 This woman received a 7 year sentence, but as far as I’m concerned, this is a person who should not be a member of society. Ever again.

The incident happened at a Taco Bell on the evening of July 9th, when the man and his wife were there to grab some food.

They had nothing to do with the following incident, which was already happening when they entered the restaurant.

22-year-old Caley Mason was arguing with restaurant workers, apparently because her food was being prepared too slow. Management had already asked her to leave, but she refused.

The man who received the slash, 48-year-old Jason Luczkow, was annoyed with the woman and told her to ‘zip it’.

After exchanging a few words, Mason stormed out of the restaurant, police said. She returned a few minutes later with a knife and slashed the man who had told her to pipe down, Det. Sam Craven told The Oregonian/OregonLive.

That’s how quickly things changed for Luczkow, and he’s lucky to be alive.

“She missed my jugular, missed my carotid artery by millimeters,” he told The Oregonian/OregonLive on Thursday. “It’s gruesome. It looks like I’m dead.”

Luzckow said his wound required more than 100 stitches. He recently grew facial hair to mask the scar, he said.

“I don’t particularly like having a beard,” he said. “But I didn’t like looking at myself either.”

The video below comes with a graphic warning, although it just shows the action and not the resulting wound. Still, proceed with caution as you normally would.

Police caught up with Mason during a traffic stop. Inside the car were herself, her boyfriend and two young children. They were all in the car during the Taco Bell incident.

Police say the boyfriend was concealing a wig in his pants that his girlfriend wore during the incident.

This isn’t Mason’s first offense. In fact, she’s got a violent past that Prosecutors discussed.

According to prosecutors, Mason was on state supervision for an armed robbery conviction in Maryland after sticking up a pizza deliveryman at her home. She will likely face more prison back east when she’s completed her sentence in Oregon.

We’ve got a winner here. At 22 years old, her 7 year sentence should be tripled. That’s just me.

The takeaway; Mind your own business. That person who is flipping out inside a restaurant because her food is coming out slowly is not a person with a level head. When the couple entered the Taco Bell, they should have simply went right back outside and found another place to visit.

Getting involved, even if it’s saying a few simple words, can turn the anger into rage during these incidents. The one thing we want to do, if we’re intervening at all, is to try and deescalate the situation.

Per the video, the man was not paying attention to Mason coming up to his side, and that cost him a significant injury.

Mason is just one of many unstable people in our society. It’s up to us to try and avoid these scenarios at all costs. And if the opportunities are there for 100% avoidance, which they were here, then take those opportunities.

Previous article: Dick's Goes Harder For Gun Control, Destroying $5M Worth Of 'Assault Rifles' In Their Attempt To Keep Them 'Off The Street', Takes $250M In Losses Next article: A Fisherman Found A GLOCK 17 On The Ocean Floor That Had Been There For 6 Months And It Functioned Perfectly - 10 PHOTOS