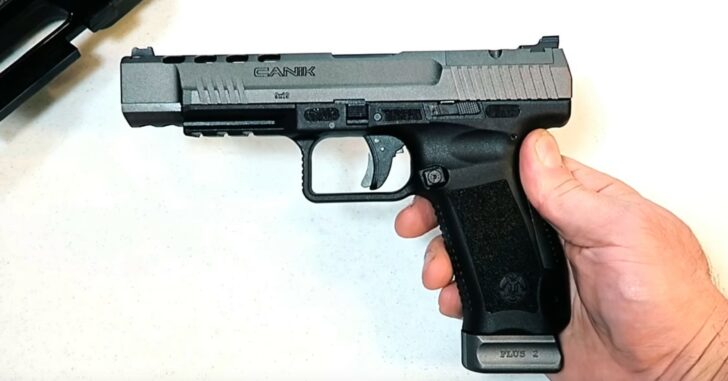 About a year and a half ago, Century Arms announced that Canik was working on a full size pistol to their line of handguns for competitive shooters. They knew that entering this crowded market meant that they would have to make a longer barrel, offer more features, create a simple optic mounting system and price it well below other pistols in the competitive shooting market. They introduced the Canik TP9 SFx and immediately the media buzz began as many people became very interested. Canik fans and competitive shooters anticipated its arrival as pictures were floated around the web and the online bloggers often questioned, “when will the TP9 SFx finally be released?”

So here we are in early March of 2017 and Century Arms has finally released the Canik TP9 SFx to the public. Canik has been known to add a lot of accessories in the case and the TP9 SFx is no exception. Along with the pistol itself, in the hard case you will find a bore brush, cleaning rod, a two-part paddle holster, two 20 round Mec Gar magazines, a speed loader, a larger backstrap, four optic mounting plates, an ambi cocking lever, a small case of screws for the plates with an allen wrench, additional fiber optic posts (orange and green), three different heights of magazine release buttons, and a trigger lock. Canik made this entire package so the shooter could leave the gun store and head straight to the range or competition without the need to purchase anything additional. To top it off, this package retails for $549. The Canik TP9 SFx has a very nice look with the Tungsten Grey Cerakote finish on the slide along with other grey accents on the backstrap, magazine baseplate, and the bar in the trigger. The slide forend has a unique look as well with eight cutout holes to made to lighten the front of the pistol. The cutouts do not add any function to the gun but they sure look cool. The top of the slide is serrated throughout to decrease sun glare and the front and rear serrations are deep cut for a strong charge or press check. The rear of the slide has a red striker fire indicator to let the shooter see when the slide has been charged along with “Warren Tactical” sights in the rear with a fiber optic front sight. The slide is also “optic ready” by simply removing two screws and popping off the rear slide cover. The user then will choose which of the four optic mounting plates will fit their optic. Screw on the mounting plate then screw on the optic and just like that the shooter is ready for red dot shooting at the range. The grip has nice texturing throughout with a sandpaper like stipple on the grip panels and the magazine “plus two” base plate drops down a half inch below the grip which will allow the largest hand on earth to comfortably grip the gun. The TP9 SFx offers two backstraps with the smaller backstrap installed on the gun. The magazine release button is extra large for an easy reach and strong deployment. Two smaller magazine release buttons are also available depending on the shooters preference.

Being a competition gun or as some may say a “race gun” Canik decided to lighten the trigger to a four pound pull. There is a very short take up until the break. The trigger reset is also very short for follow up shots. I found the quick shooting of the TP9 SFx to be smooth and crisp with very little muzzle rise. At the range, I decided to run 100 rounds of Hotshot 115 grain steel case 9mm and a 100 rounds of Remington UMC 115 grain brass case 9mm. All 200 rounds fed, fired and ejected without issue. I will also note that I did not clean or lube to the pistol prior to shooting. I wanted to get a true “out of the box” feel for the gun due to Caniks claim that the gun is ready to hit the range immediately. I did however add a Leupold Deltapoint Pro to the TP9 SFx and that process couldn’t be easier. The race gun performed just as I had hoped. It was accurate, reliable and smooth. The trigger felt exceptional as the gun pointed and shot very well. I will also add that the 20 round Mec Gar magazines were great. They load a true 20 rounds and the last round was not super tight like many other mags over 15 rounds. Shooting 20 rounds before a mag reload made the range session a lot of fun as I was able to spend more time shooting and less time loading mags.

The paddle holster that was included in the case worked well but I think serious competitors will switch it out for their favorite holster brand. Yes it worked fine, carried the gun and had decent retention however it is more of a weekend range shooters holster instead of a serious race gun holster in my opinion. With the gun weighing in at just under 40 ounces fully loaded, I would choose a holster that secures the gun closer to the body with a more firm grip on the belt. To disassemble the Canik TP9 SFx is an easy process and one that many are familiar with. Once removing the magazine and assuring the gun is unloaded, pull back on the slide about a half inch and pull down on the takedown levers just above the trigger. Then by pulling the trigger the upper will easily slide off the frame. By removing the captured recoil spring
and 5.2 inch match grade barrel, the TP9 SFx is completely field stripped. To reassemble, perform the same steps in reverse order without the need to pull the trigger.

Overall, I have to say the Canik TP9 SFx is a quality made pistol that is feature loaded. Given everything that is offered in the case and the pistol’s shooting performance itself, competitive shooters now have another choice of a pistol that is priced amazingly low compared to others in the race gun market. I really enjoyed it’s long barrel accuracy and 20 round capacity which would make this pistol a good home defense choice as well. I would hesitate to call this a “budget gun” due to it’s quality craftsmanship and strong feel however the $549.99 price tag certainly suggests that. I prefer to call it an excellent pistol for a great price that would help make an average shooter feel like a professional.