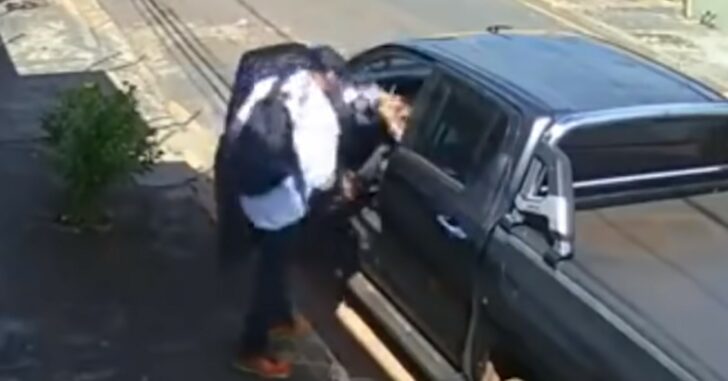 Chances are, this robber had no idea what happened in the seconds after being shot, and he just begins to run for his life.

Approaching a vehicle parked on the side of the road, this armed robber thought he’s about to get an easy score of this truck. Knowing that someone was sitting in the drover seat, he goes up and puts his gun to the driver’s window.

A few seconds goes by, as the man in the truck is able to keep the door closed and wasn’t giving the robber easy access to his vehicle. What is actually happening inside the truck during this time is this; the man is getting a gun of his own in-hand so that he’s ready to go once that door opens.

As soon as the door opens, the robber had little time to react, and might not have even registered that the man already had a gun directly in his face.

And that man wastes no time making the decision to pull the trigger.

As the news story goes, the robber did not make it through the point-blank shot to his face, but his adrenaline allowed him to run away a significant distance. It was probably during that time, or shortly after, that the man realized he has made some poor choices in life. Or at least his last choice.

Check out the video below, learn some lessons, and always stay prepared.

Previous article: Defenseless Improv: Man Takes Gun From Robber And Shoot, Kills Him Next article: Father And Daughter Meet Up With iPhone Seller, End Up Being Robbed At Gunpoint, Then The Father Shoots At The Fleeing Suspects