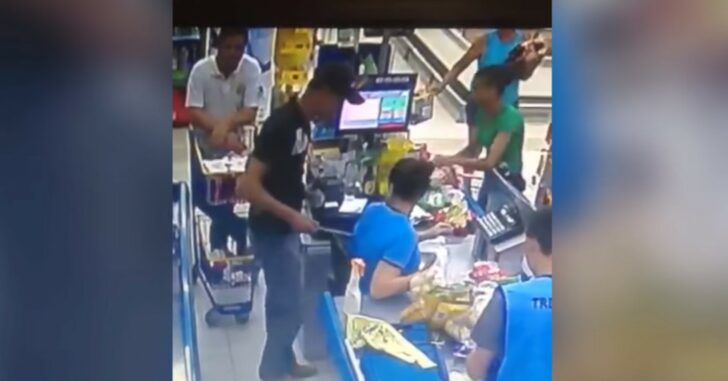 There are many days, thankfully, where the bad guys don’t get away with what they’re doing, and sometimes it ends at the hands of legally armed people mixed in with everyone else.

The video below shows a robber, armed with a long knife, and he puts it up to the cashier’s back. He thinks he’s about to make a quick score, but the armed off-duty police officer right behind him has other plans.

Here are the details of what went down in less than 15 seconds;

This bungling robber was caught after he poked a checkout girl in the back with a knife – in the same supermarket queue as an off-duty POLICEMAN. The 25-year-old attacker in a black baseball cap calmly pulled out the 12-inch long weapon and prodded the terrified shop assistant with it. She opened the till for him to grab cash – but the thug didn’t notice off duty civil policeman Osmar de Albuquerque Pontes Junior waiting to pay fro groceries behind him in the queue – despite Osmar wearing his white police polo top. The ice-cool cop pulls out a handgun and holds up the crook who put up a brief fight with police before being overpowered in Prudentopolis, Brazil.

That’s a fine display of stopping a felony in progress with a firearm if I’ve ever seen one. Luckily no one was injured, and this officer was able to end the tense situation rather quickly.

Previous article: Walgreens, CVS, Wegmans All Join Bandwagon Asking Customers Not To Openly Carry Firearms Next article: Feds Demand Info On 10,000+ Users From Google And Apple Who Use Gun App