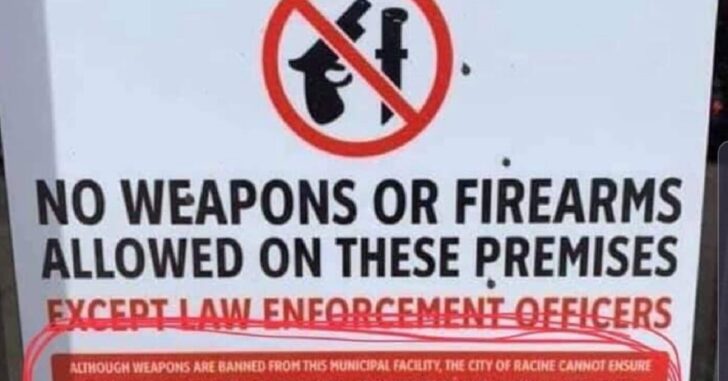 In the aftermath of the Virginia Beach shooting that took place less than a month ago, a municipal sign that was caught by an attentive gun rights activist has been raising serious eyebrows.

No Weapons or Firearms Allowed on These Premises

Although weapons are banned from this municipal facility, the city of Racine cannot ensure the protection of visitors or its employees from individuals who unlawfully enter with weapons and does not offer protection against the actions of violators.

In other words: “Here’s the law- it’s mandatory, and you have to obey it. However, if anyone decides to disobey it we aren’t going to take any responsibility for us disarming you and you’re entirely on your own. Man, I hope no one breaks the law!”

That’s not even that heavy of a paraphrase. What they state is insanity.

First, they strip the rights of American citizens.

Secondly, they state that although they have done so, they are fully aware folks might (will) break the law.

Thirdly, acknowledging that they created a problem in their own building, they front as though they aren’t responsible.

And lastly, not only do they disavow responsibly, they claim they won’t offer any protection to their own employees.

That’s cowardice. There’s no way around that. Just because firearms make some of the city authorities uncomfortable, lives are put in jeopardy. This screams “lawsuit.” If there were a shooting in that building, I could easily see that sign being used in a lawsuit against the city. All you would have to do is say “Hey, these guys acknowledged the danger we were put in and did nothing, then disarmed me so I could do nothing.”