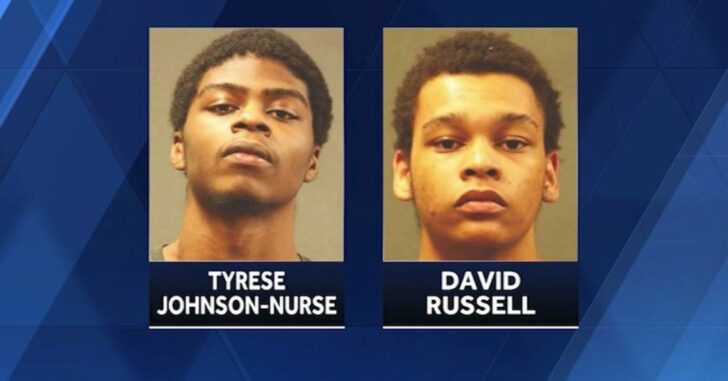 QUINCY, MASSACHUSETTS — One man is in jail and another is out after police say they beat a pregnant woman on the street, kicking her in the stomach as her boyfriend and onlookers tried to stop the assault.

19-year-old Tyrese Johnson-Nurse and 18-year-old David Russell are the suspects in the unprovoked attack. Johnson-Nurse remains in jail and being held due to an unrelated charge of armed robbery. His bail was revoked.

Police say [Leanne] Hindy was walking with her boyfriend Tuesday evening when she felt sick because of her pregnancy and began to throw up. Johnson-Nurse and Russell allegedly laughed at and spit on her.

The young adults then got into the couple’s faces and began punching Hindy in the head, as she screamed that she was pregnant, according to police. The men also attacked Hindy’s boyfriend.

According to the police report, the victims told officers Russell kicked Hindy in the stomach, as he allegedly said, “I hope he dies. I will kill your kid.”

While the prosecution argued that both men are a danger to society, it apparently wasn’t enough.

Following the hearing, Russell was expected to be released Friday with a GPS monitor. He was not required to post bail but must stay away from the victim and any witnesses and remain in his house except to go to work.

How you can let Russell out is beyond me, but this is the way our justice system works.

Had the boyfriend or anyone else in the immediate area been armed, this assault might not have ever taken place. Or, at least it might have ended the assault earlier.

Hindy did not have any visible injuries, but was taken to the hospital for a through check-up. The baby was not harmed during the incident, and Hindy thanked those who helped her.

“Thank God for the citizens. If it wasn’t for them, I don’t know if I would be OK,” Hindy said.

The video can be seen here, but may upset some viewers.