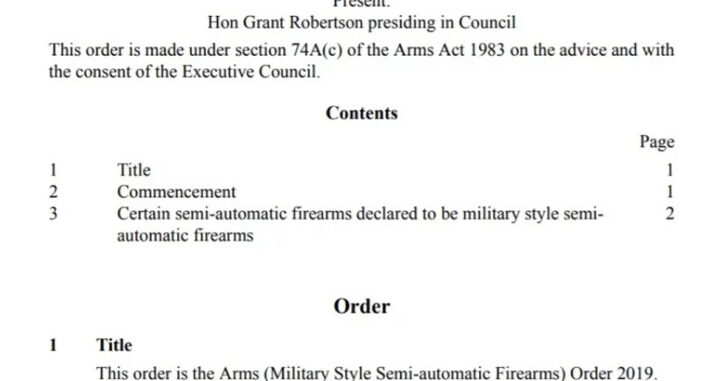 As we mentioned, the Government of New Zealand, under the direction of Prime Minister Jacinda Ardern, has banned the lawful ownership of semi-automatic firearms in the land of Kiwis and Hobbits. Gun owners in the US say that could never happen here. We don’t have gun registration. Think again.

The PM is a member of New Zealand’s Labour Party. Like America’s Democrats, civilian disarmament is one of their dearly-held goals.

After last week’s mosque shootings, the New Zealand’s gun-grabbers are wasting no time in following Rahm Emanuel’s advice.  As released by the Parliamentary Counsel Office of New Zealand, the order states the following:

My contacts in New Zealand have forwarded me the following information.

New Zealand doesn’t have direct registration of firearms either. Instead, they have registration of gun owners. Each owner must be permitted to lawfully own a firearm. So the government knows who has what through gun store records and what category of license they posses.

So the government knows that there are 245,000 firearms licenses and of those; 7,500 are E-Category licences and 485 are dealers. From dealer records they know that there are 13,500 firearms which require the owner to have an E Category license. This is effectively the known number of “military-style” semi-automatics (MSSAs) before today’s changes.

As a requirement of having a firearm license, the New Zealand police perform inspections of firearms license holders’ homes once a year for Dealer and B-Category permits. For C & E Category they visit once every three years.

This happens without a warrant and firearms can’t be kept “at the ready” for self defense. The police even inspect panic rooms and “survival bunkers”.

Does this sound familiar? It should. Illinois is doing something similar right now. They’re combing through their records of revoked FOID cards and going after their guns.

It’s the same in New Zealand. The government there will be having the police, with military assistance, confiscate the newly outlawed guns. Right now they are expecting a large percentage of gun owners to voluntarily surrender during the amnesty period and eventual buyback. But the government knows that some will resist and they will have to knock on doors.

The same could happen here if some or all firearms are ever outlawed. Folks believe that as long as their guns aren’t directly registered, they’re safe from confiscation. But if you have a concealed carry permit/license, own NFA items, or live in a state/territory that requires registration or a permission slip to own firearms, they know there’s a high probability that you own them. And then there are FFLs’ sales records.

In short, there is enough information in various databases out there to compile a fairly good list of who owns what. Of course there will be cracks in the system, such as home-made firearms, and some will slip through. But for the most part, law-abiding gun owners who comply with gun control laws can be red flagged if and when confiscation happens here.

Previous article: POLL: If Someone Has A Negligent Discharge, Should They Be Required To Undergo Training? Next article: Understanding The Supremacy Clause & Why "Federal Nullification Laws" Could Land You In Prison