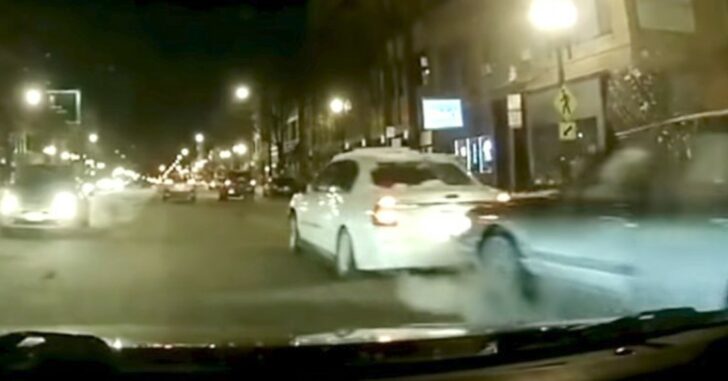 Bullets ricocheted and one careened through a window of a nearby bowling alley Tuesday evening in Chicago. The shots came following a road rage incident captured on one driver’s dash cam. Thankfully, no persons served as backstops for the rounds.

However, the suspect remains at large. Police describe him as a black male with a black bandana or hat, black shoes, light-colored pants – and a reindeer-patterned sweater. Egads. No wonder he was in a bad mood.

The shots came in the 1900 block of West Irving Park Road at about 7:25pm. Definitely not a(nother) case of dead-of-night violence among Chicago’s rich and vibrant culture.

The video shows two cars pull out into traffic, one hot on the tail of the other in a bona fide road rage incident. Soon, thanks to the video, we see how one car’s road rage transitions to attempted murder.

Of course, even if cops catch the would-be killer, he likely won’t face serious charges.

Here’s another video from a couple of years ago. It features a drunk woman emerging from a Lincoln Park nightclub – in the “safe” part of town – with a revolver in her purse.

She pulled it and began shooting at the people with which she had a dispute. Yes, in a fit of drunken anger, she empties the little wheelgun at them, trying to kill them. All over some trivial disagreement. Welcome to Chicago.

Really. DNAInfo had the story:

Around 2:10 a.m., shots were fired near the 2600 block of North Halsted Street, near Wrightwood Avenue, according to witness reports and Chicago Police.

According to Crime in Wrigleyville and Boystown blog, which first wrote about the incident, 911 callers said that the fight began at the nearby Wild Hare nightclub.

A video emerged on YouTube Saturday night that shows a group of people arguing and shoving each other. There are about five gunshots over the course of the two minute and 30 second video, in which the group continues to fight on the sidewalk and shout at each other.

Police said they were able to arrest the shooter after she was identified by several witnesses, though officers did not recover the weapon that was used.

Jennifer Spegall, 32, of Broadview, Illinois, was charged with reckless conduct. She will appear in court on November 12.

If Spegall had pulled that stunt back when Florida had the 10-20-Life sentence enhancement on the books, she would spend twenty-some years in prison. In Illinois, she likely didn’t even spend twenty-some days in jail on the misdemeanor charge.