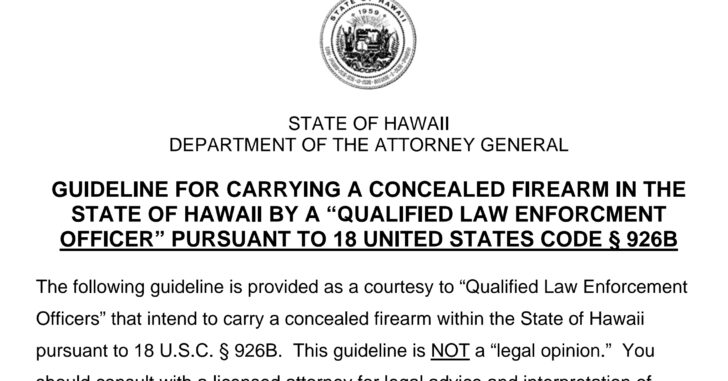 The Hawaii attorney general has released a new guideline and in their legal opinion, they state that unless out-of-state law enforcement officers and agents are on official business within the state, they cannot carry a concealed firearm.

Whether you agree with the Law Enforcement Officer Safety Act federal law allows currently sworn or retired law enforcement officers to carry nationwide even, if the state or territory they are carrying in doesn’t allow it for the masses. The state of Hawaii is, in effect, saying that federal law doesn’t apply in the 50th state.

Additionally, there is even some confusion as to when an out-of-state cop is on duty. Since Hawaii doesn’t believe that LEOSA supersede state law, on-duty out-of-state officers need to comply with state law in order to carry their guns in Hawaii. If an on-duty officer is in possession of a gun in the state for more than five days, they are required to register their gun with the chief of police in the county in which they are staying.

It appears that Hawaii is pushing a state’s rights claim on this matter, much in the same way that other states have passed drug legalization laws.

Also a number of states have passed so-called Firearm Freedom Acts, declaring that if a gun is made within the state without the intent to be sold in another state, then the National Firearms Act doesn’t apply. Montana passed such a law and the Federal Government curb stomped it twice (here and here) stating that state laws or legal opinions do not override and supersede the federal law.

It also appears that the gun grabbers, intentionally or not, are starting to curb carve-outs to law enforcement. New Jersey just passed a magazine ban and said off duty law enforcement officers aren’t exempt.

Will the federal government tell Hawaii to back down or will they let the state flout federal law? If Hawaii or the feds fight this, it will end up in the Ninth Circuit. Would you like to guess how they’ll rule on this one?

Previous article: #DIGTHERIG - Joe and his GLOCK 19 in an El Paso Saddlery Combat Express Holster Next article: Man Brutally Slain By Bear Because He Lacked a Round in the Chamber