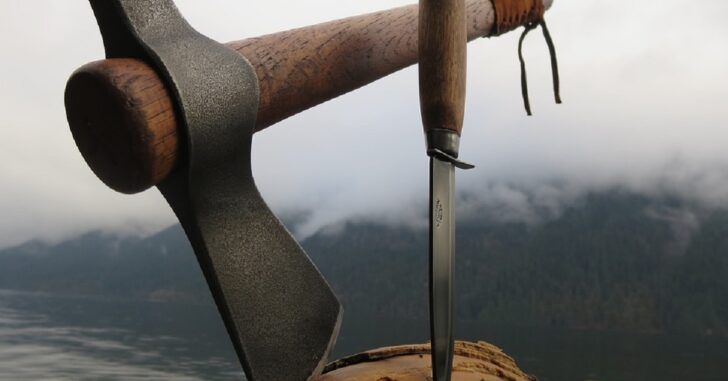 NESHANNOCK TOWNSHIP, PA — A man is lucky to be alive after his neighbor went berserk in the climax of an ongoing dispute between the two parties, threatening both their lives in a shootout after attempting to batter down the victim’s door, The Patriot style.

By that, I mean this crazy neighbor — who had a gun — first tried to gain access to the resident’s home with the use of a tomahawk.

A Lawrence County man is facing a long list of charges after police say he tried to chop down his neighbor’s door with a tomahawk during a heated dispute that ended in gunfire. According to police, it happened just before 5 p.m. Monday along West Fairmont Avenue in New Castle.

Neshannock Police say they have arrested 56-year-old Martin Quimby and charged him with attempted criminal homicide, attempted burglary, terroristic threats, reckless endangerment, aggravated assault, criminal mischief and discharge of a firearm into an occupied structure. Police say Quimby’s neighbor first called them to the street, reporting that someone was trying to break into his home. The two neighbors were allegedly in an ongoing dispute.

Investigators say the victim told them Quimby became angry and threatened to kill him. The victim reported to officers that Quimby told him he had 15 minutes to make amends, “or he was going to cut [the victim] to pieces.”

Police say Quimby then came over to the victim’s home with a tomahawk and began chopping at the door. The victim fired his double-barreled shotgun, and police say Quimby returned fire with a 9mm, allegedly saying, “So that’s the way you want it.”

No one was injured in the incident.

When I was a kid, I used to throw a tomahawk for the better part of an hour just about every day — it beat learning how to talk to people. That’s a tool/weapon that’s got every bit the potential to be as deadly as sometimes shown in movies when used formidably.

Obviously, the man trying to hack his way into his neighbor’s house. “So that’s the way you want it” is hardly a fair response for answering in kind.

If you can manage it, don’t let an argument with a neighbor escalate to violence. It’s almost never worth the trouble.

If you’re faced with a situation like this, however — if you’ve got a double-barreled shotgun, make sure that’s all you need.