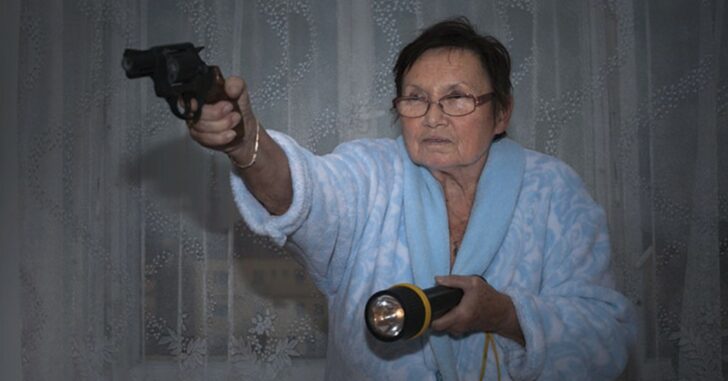 In Leavenworth, Kansas, this week, a 74-year-old woman was sound asleep with her .22 handgun when a burglar forced his way into her home. The handgun was a recently acquired bedfellow: The woman had bought it after reporting an attempted burglary just one week prior to this incident.

It was about 1:15 a.m. when Ralph Byrd Jr., age 41, woke the woman by breaking into the home. The woman (whose name has been withheld for her safety) immediately dialed 9-1-1. The operator was on the phone with her as Byrd made his way up the stairs. Unexpectedly, the elderly woman was waiting for him on the second floor. She met him with a single shot to the head, which proved fatal.

“It was pretty cut and dried,” said Leavenworth Police Major Dan Nicodemus. “She called 911. She stayed on the phone. She confronted the burglar and she defended herself.”

Right after pulling the trigger, the woman began suffering a heart attack. Fortunately, the police and medical personnel were already on their way to her home. When they arrived, they were able to transport her to the hospital

“Obviously,” Leavenworth County Attorney Todd Thompson announced, “the county attorney is not going to file charges against the 74-year-old woman.”

According to court records, the deceased Mr. Byrd had already been convicted of an attempted burglary in 2017.

The woman’s neighbor, Jeff Marrin, says she’s lived on his block for over 10 years. It’s a quiet neighborhood, where most of the homes are close to 100 years old, and the neighbors try to look out for one another