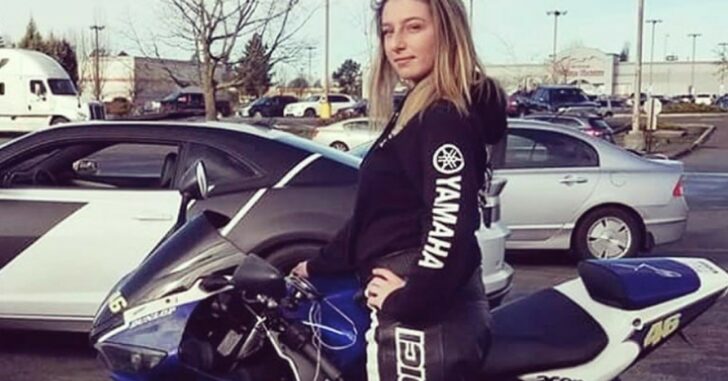 “Aubrey Bowlin, 24, never thought she’d find herself in a fight for her life — much less a fight that began with road rage — while commuting home from work on her motorcycle.” No one ever does. And that’s why over 17 million American are now licensed to carry.

During the Seattle woman’s commute, another car repeatedly tried to run her off the road. Then traffic came to a halt . . .

While stopped in the next slowdown, Bowlin could not believe what she saw in her mirror. (Sixty-year-old Bruce) Jones had stopped his car and was coming toward her. She put her kickstand down, preparing for a fight.

Bowlin knew already that a physical fight would be heavily weighed against her. Not only did Jones have several inches of height on her, but she was wearing a tracksuit that did not allow her to move very easily.

Jones first hit her with a chest bump, to which Bowlin retaliated with a head butt, sending him into the guard rail.

Jones grabbed her and tried to remove her helmet, most likely to inflict more damage.

In the fetal position against the barrier as Jones weighed down on her, Bowlin began to slip in and out of consciousness due to the tightness of her helmet’s chin strap. Bowlin realized in her lucid moments that Jones was going to choke her to death.

“If he had gotten my helmet off, I would’ve been dead,” she said.

It was at this point that Bowlin suddenly remembered that she had a firearm. She knew that she had to save her life.

Bowlin drew and fired, hitting Jones once with a fatal shot to the stomach.

By now, other drivers were stopped and getting out to help Bowlin as she crawled away, throwing up. Compassionate toward her attacker, she told them to help Jones, who was lying on the ground a few feet away.

Just another life saved thanks to the defensive use of a firearm.

Previous article: #DIGTHERIG - Mike and his Springfield XD Mod.2 45 in a Stoner Holster Next article: Man Shot and Killed After He "Blew a Gasket" When His Wife Left