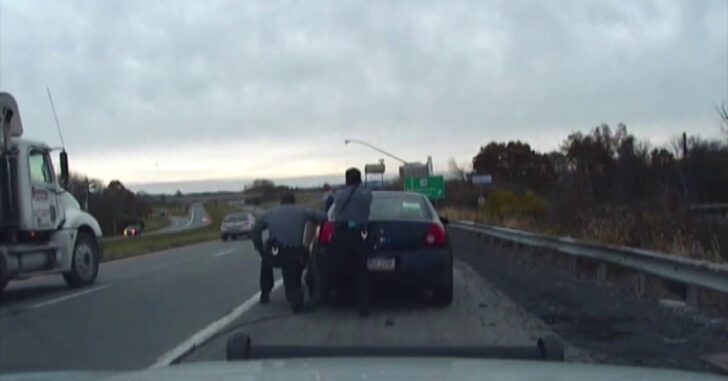 When seconds matter, police still need to restrain themselves as much as possible. It’s a shame that this traffic stop ended this way, but it highlights just how difficult, hard, scary, and dangerous a police officer’s job truly is. In a matter of seconds, a pretty routine traffic stop turned deadly. The incident happened on November 7th 2017, when police pulled over Daniel Clary for speeding. He wasn’t performing very well with the tests they gave him, so they attempted to place him under arrest. For about a minute, they fight with him to get the handcuffs on, showing tremendous restraint. Then, Clary manages to get away –after being tasered– and reach for a pistol inside his vehicle. He wastes no time firing shots at State Trooper Seth Kelly and and his partner. Kelly’s heart reportedly stopped after he was shot and when he arrived at the hospital, he was clinically dead. He was placed in a medically-induced coma for 12 days and had to stay at the hospital for nearly one month. Clary was found and arrested on multiple charges, including attempted murder. His lawyer argued that he was scared.

Clary, 22, of Effort, Pa., was convicted June 29 of multiple felonies, including attempting to kill Seiple and Kelly. His attorney argued at trial he was scared and shot at the troopers because he feared for his life.

I understand that lawyers have a job to provide the best possible outcome for their clients, but there should be a line. It’s a disgusting thing to see, although a defense such as this would never hold up in court. Speaking of court, Clary is to be sentenced on August 31st. Let’s hope for nothing more than the maximum.
Categories: General, News

Previous article: Store Owner Sees Robbery On Camera At Home, Goes To Store, Shoots And Kills Robbery Suspect Next article: #DIGTHERIG - Dylan and his Glock 43 in an Alien Gear Holster