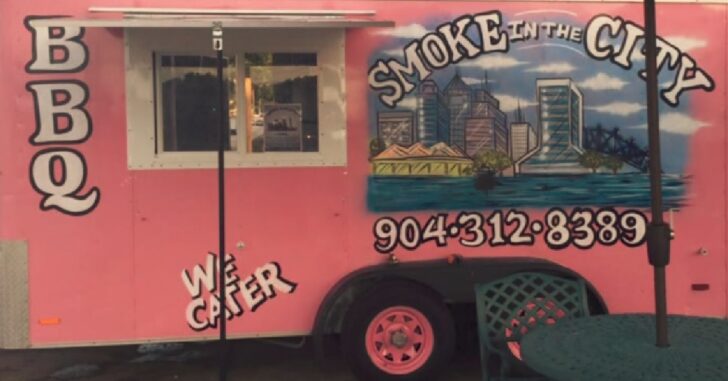 JACKSONVILLE, FL — One restaurant owner was absolutely fed up earlier this month with burglaries into her place of business.

As many might do, she staked out her own restaurant, and waited for the next attempted burglary to go down — with her ready to respond.

And respond she did — police arriving on the scene found would-be thief Issac Palmer staying put at gunpoint.

And the best part? This particular restaurant isn’t a brick-and-mortar establishment. This confrontation took place in defense of a food trailer.

That makes sense — food trucks and their like make some fantastic fare.

A restaurant owner fed up from being burglarized held a suspect at gunpoint after he tried breaking and entering.

The Jacksonville Sheriff’s Office said they arrived to find Jovette Williams, the owner of Smoke in the City, holding the suspect, Issac Palmer, at gunpoint when they arrived.

Williams said she recently had her BBQ trailer business burglarized twice and watched the trailer as an unknown suspect began crawling underneath the door. She said Palmer pulled the door out and made entry into the trailer. (She told police that the door to the business is able to be locked, but the bottom is broken so that it may be pulled out.)

She said she held Williams at gunpoint until police showed up.

This is, in addition to effective self-defense at one’s place of business, an excellent example of reasonable restraint.

Was Williams’ place of business being invaded? Yep. Was her life in danger, being outside of the trailer? Not necessarily. However, it very well could have been. She was right not to pull the trigger — and I’m sure the police are glad some of their work has been taken off their collective shoulders.

Be vigilant, but keep your cool — you’ve got to survive the aftermath of a confrontation, too.