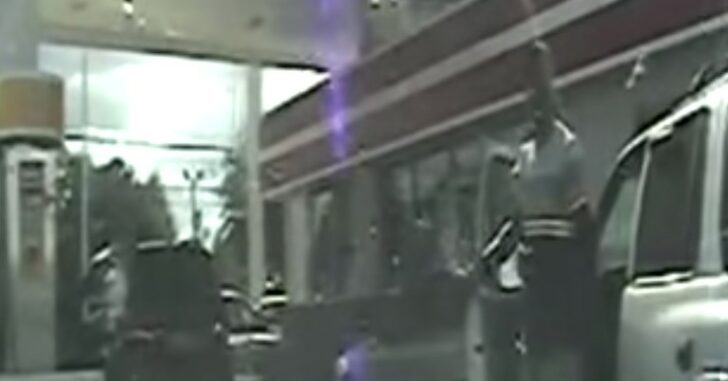 This is article #2 on this story, and is likely not to be the last. Earlier today, we reported on a police officer who fired at a person he had just pulled over for a seat belt violation. The victim, Levar Edward Jones, was reaching in his vehicle to get his drivers license after the officer asked him to retrieve it.

Here is how the confrontation went:

Officer: Can I see your license please

Jones: *turns to get wallet from vehicle*

Jones: What did I do?

Officer: Put your hands behind your back

Officer: Are you hit?

Jones: I think so, I can’t feel my legs. I don’t know what happened, I just grabbed my license. Why did you shoot me?

Officer: Well you dove head first back in your car

Officer: Then you jump back out, I’m telling you to get out of your car

Jones: I’m sorry, I didn’t hear two words. My license is right there in the front, I didn’t do nothing

Jones: Why would you pull me over, I just pulled in to get..

Jones: Seat belt? I just pulled it off right there at the corner to pull in the gas station

The rest of the video is a few more back and forths between the officer and Jones. Citizens can be seen standing in the background watching while the events unfold.

I would hate to be in this officer’s shoes for more reasons than one. For whatever reason, he sees this man turn back to his vehicle in a manner that he deemed, if only for a moment, to be a threat to his life. Moments later, the officer gives his own version of “I’m sorry for being such a dumba$$” by saying “Are you hit? … I got help coming to you. Just sit still, brother, sit still for me.”

The officer fired 4 shots, according to the audio in the video. At the time, there were at least 4 vehicles in the gas station lot, as well as numerous moving vehicles on the street in the background. Also, there is no doubt that people were inside the gas station at the time of the shooting.

The catch? The victim was (thank God) only hit once, apparently in the hip. That’s not very good shooting for an officer who carries a firearm all the time. I would personally never want to rely on this officer saving my life, because I am certainly a better shot than he is. He was literally a few feet away.

With that said, this officer’s lack of shooting ability is most definitely what saved Jones’ life, ironically.

He’s lucky no one else was injured or killed

Going back to the vehicles and people in the immediate area, and the fact that 3 of the 4 rounds missed their intended target, this officer is lucky no one else was injured during his paranoid discharge of his firearm.

I am anxious to hear what the official police report has to say, and see where the other three shots ended up. It wouldn’t surprise me if a few made it to the highway in the background and also inside the store.

It seems there has been a recent rash of police-involved shootings that have come under scrutiny for excessive force. Is it a new trend, or does it happen all the time and the only reason we’re hearing about these cases now is because of the Michael Brown shooting?

Just today, a Walmart security camera video was released (below) that shows the shooting of John Crawford III. Crawford was shot and killed after someone had called police to say that an armed man was in the store. When police arrived, they shot and killed Crawford who had an air rifle in his hands after he apparently didn’t listen to commands to drop the rifle. The air rifle had been taken off a Walmart shelf by Crawford while he was walking around the store.

I’m not sure what the verdict is on these recent police shootings, but I do know that we have video evidence to see some of the events for ourselves and make our own decisions based on this evidence.

What do you think? Do you feel that police officers are more high-strung than previously seen by the public? Is this the norm? Or is this a few bizarre cases that happened to occur around the same time?