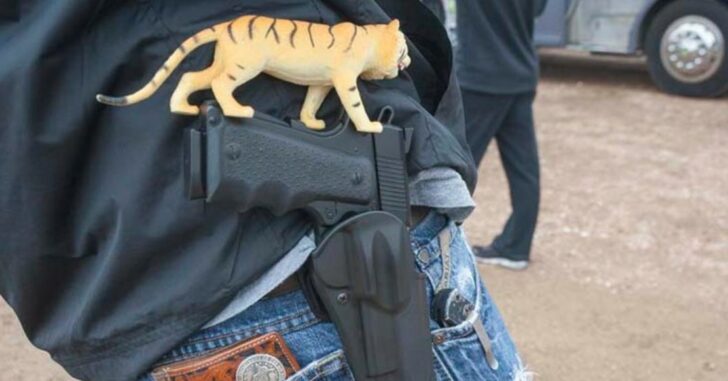 The right to carry a firearm for law-abiding citizens barely exists in Hawaii. A so-called may-issue state, the Pacific paradise hasn’t issued a permit to carry this century. As far as the fiftieth state is concerned, Americans only have a right to keep and bear arms in their own homes.

That violation of his Second Amendment rights (see District of Columbia v Heller) was the basis for George Young’s suit against the state. Yesterday, a three-judge panel of the Ninth Circuit Court of Appeals in a two-to-one decision, agreed with Mr. Young.

A federal appeals court ruled on Tuesday that the U.S. Constitution’s Second Amendment protects a right to openly carry a gun in public for self-defense, rejecting a claim by Hawaii officials that the right only applies to guns kept at home. …

Two of the three 9th Circuit judges voted to reverse a decision by the U.S. District Court in Hawaii that state officials did not infringe on the rights of George Young, the plaintiff, in twice denying him a permit to carry a gun outside.

“We do not take lightly the problem of gun violence,” Judge Diarmuid O’Scannlain wrote in Tuesday’s ruling. “But, for better or for worse, the Second Amendment does protect a right to carry a firearm in public for self-defense.”

You can read the full ruling here. The majority opinion wasn’t friendly to concealed carry, but here’s the main takeaway:

In determining the appropriate level of scrutiny to apply to section 134-9, the panel first held that the right to carry a firearm openly for self-defense falls within the core of the Second Amendment. The panel stated that restricting open carry to those whose job entails protecting life or property necessarily restricts open carry to a small and insulated subset of law-abiding citizens. The panel reasoned that the typical, law-abiding citizen in the State of Hawaii was entirely foreclosed from exercising the core Second Amendment right to bear arms for self-defense. The panel concluded that Hawaii’s limitation on the open carry of firearms to those “engaged in the protection of life and property” violated the core of the Second Amendment and was void under any level of scrutiny.

The State of Hawaii, much the same as California, now has a decision to make. They can appeal for an en banc review of the decision a la Peruta and risk a possible further appeal to a Supreme Court that’s expected to include a Justice Kavanaugh. Or, in order to avoid another potentially precedent-setting Supreme Court ruling, Hawaii could decide to bite the bullet and, like DC, be dragged kicking and screaming into issuing citizens (open) carry permits. Watch this space.