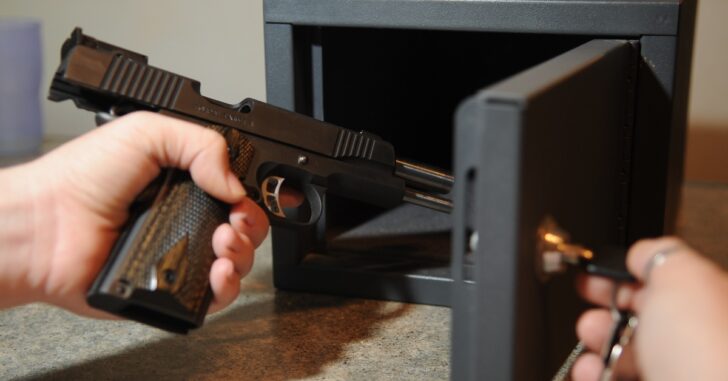 Most everyone has a different way of storing their firearm away at night.

Whether you sleep with a handgun tucked under your pillow like an action movie hero or you keep a shotgun unloaded on a rack nearby, people tend to govern their choice in storage based on the answers to two major questions:

You could actually add to that second point how easy it is to be accessed by you in given circumstances — I know more than one sleepwalker who keeps their firearm in a safe without a round in the chamber for fear of doing something while not in his/her right mind. Nothing wrong with a little bit of caution.

ConcealedCarry.com’s Jacob Paulsen conducted a study in which he assessed nighttime firearm storage preferences, and some of the responses he received may well surprise you.

He found that when concealed carriers go to bed, the sweeping majority keep their firearms nearby the bed out of a safe — apparently they feel that the time needed to get into a gun safe represents too much of a danger when time is of the essence. I hardly blame them.

What’s more surprising is just how many gun owners sleep with a round not in the chamber.

According to Paulsen a full 35 percent of gun owners that keep their firearms nearby and out of a safe don’t store it with a round in the chamber — that may well be because they want a definitive action of some type before someone can fire, and since the gun is out of a safe they elect to limit the gun’s handiness to others  through that route.

The percentage of folks who keep their firearm with a round chambered and in the safe at night would seem to support that theory — it’s only 29%.

Also of note is the type of firearm kept for home defense at night — for all of the praise we pour on shotguns (and rightly so) a full two thirds of those surveyed kept a semi-automatic handgun ready for an intruder over anything else.

You can take a look at the survey’s results below: