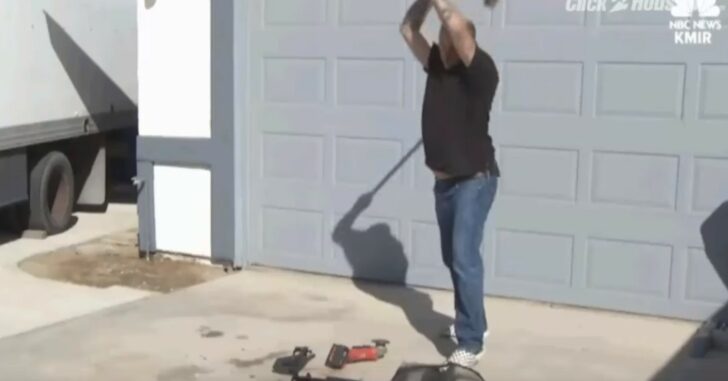 Then, I was shown the way when California resident Chad Vachter stepped into my life via the internet.

Vachter was looking for some publicity, and boy has he received it. It’s not the first time that someone has destroyed or turned in firearms to show their support to end mass shootings, and it certainty won’t be the last.

He’s a gun owner and 2nd Amendment supporter, but damn, he’s doing it the wrong way.

For those with weak stomachs, you may not want to watch this beautiful rifle meet it’s end:

He told reporters, who were conveniently there during the destruction;

“I can’t do it,” he said. “I can’t have something in my house that so easily could become a part of another situation like that, and I’m not going to be desensitized to it. I refuse to.”

It almost sounds like he’s scared that he will go commit a mass shooting. Of course that’s not the case, but is he really afraid that it’ll be stolen and used to kill people? If it’s properly stored, that shouldn’t happen.

Oh well. Back to the media attention.

“The other night, when I read the thing about the school in northern California, I cried and I haven’t felt good since,” he said. “And although I’m still sad for all those victims and all the people affected, I feel like I’ve done the only thing that I can do in this equation. Even if it’s just a small thing, I did my part to make things better.”

Vachter did keep some of his guns, including a shotgun and a pistol. He may be unaware, but given his logic, he should have instead destroyed the pistol. Those are used in mass shooting far more than rifles.

I hope that Vachter doesn’t ever have to face a mass shooter like hero Stephen Willeford did in Texas. His now-destroyed AR-15 would have been a much better candidate against a  gunman in a similar situation.

He also encourages other gun owners to follow suit and do as he did to their ‘assault weapons’. It’s nice that he used the term, since we know that the media eats it up like I’m eating this ring pop.

In closing, I’d like to counter Vachter’s address to gun owners looking to take him up on his request;

Instead of destroying your firearms so as to keep them out of the hands of the next mass shooter, get in contact with me so that we can arrange them to be shipped and taken into my possession. I have the means of properly storing them, so they won’t be stolen. It’s because I’m responsible.

Previous article: Man Comes Home To Burglar, Who He Shoots And Kills On Sight Next article: Flint Resident Returns Fire On Thugs During Encounter On Street