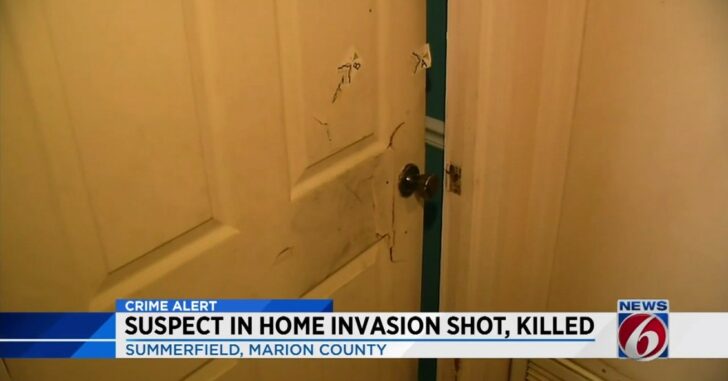 SUMMERFIELD, FLORIDA — Having a gun gives us at least a fighting chance in the event that a home invader manages to get in. One couple recently realized just how important it is to be armed. From clickorlando.com;

“The fatal shooting was reported at 10:30 p.m. at a house on SE 158th Place in Summerfield. According to the Marion County Sheriff’s Office, deputies were called to the home in connection with an armed home invasion. The victim said that he was about to go to bed when four masked people entered his home and injured his dog. “I just heard my back door get kicked in and next thing I know, my dog ran out and I heard a gun shot,” the victim said. “And the next thing I know, a guy was meeting me at my door with a gun, stuck the gun in my door. I slammed the door and the gun just started going off.”

The victim said that his girlfriend, who was in the closet at the time, threw the shotgun to him so he could defend them. He shot one of the intruders, who was identified Wednesday as Shawn King, 32. King was dropped off outside the Ocala Health Summerfield Emergency Room, where he died. The homeowner told reporters that his dog, Zeus, is recovering after being shot in the head during the invasion. I read one time that just the fear of being shot is often enough to dissuade criminals from targeting certain homes. Do you believe it? Leave your comments below to get the discussion going. I would say that those invaders, and a lot of others, don’t take that into consideration. Then when they stumble upon a home with armed occupants, it’s probably going to be a bad day for them. Here’s to show how important carrying your firearm is, or in this particular situation, being alert and acting wisely with a little team effort.
Categories: General, Guns Saving Lives, News