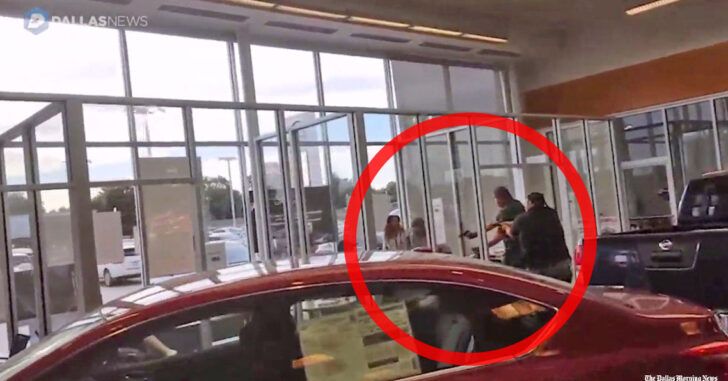 GREENVILLE, TEXAS — A pair of bounty hunters were on the track of a fugitive, Ramon Michael  Hutchinson, 49, who was wanted on felony drug charges. They found him at a car dealership and decided to take him into custody.

The results were deadly and captured on a cell phone camera.

Both bounty hunters, identified as Fidel Garcia Jr., 54, and Gabriel Bernal, 33, as well as Hutchinson were killed in the shootout. Around 20 shots were fired in just a few seconds.

Hutchinson was in an office with another person when Bernal and Garcia approached and began giving him commands, according to Greenville officials. Hutchinson tried to pull a pistol from his waistband but dropped it on a desk.

Officials said the men scuffled as Hutchinson tried to pick up his gun. Hutchinson was able to retrieve his gun and began firing, and the bounty hunters fired back, according to police.

No one else was wounded in the exchange. Watch the video below:

I guess the risk of death comes with being a bounty hunter, but it seems that a better option would have been to wait for the man to exit the building. Instead, other lives were at danger when the fugitive was confronted inside a glass box. It’s incredibly sad that these men lost their lives, and I wish that another route was taken to try and apprehend the man.

If you can’t get him as he’s leaving the dealership, follow him until he stops. Cornering a wanted man with others around doesn’t seem like the best way to get things done in the safest and best way possible.

Previous article: Jogger Shoots Dog After Being Chased, Owner Wants Justice Next article: A 911 Call You Never Want To Make: Wife Shot By Husband In Case Of Mistaken Identity