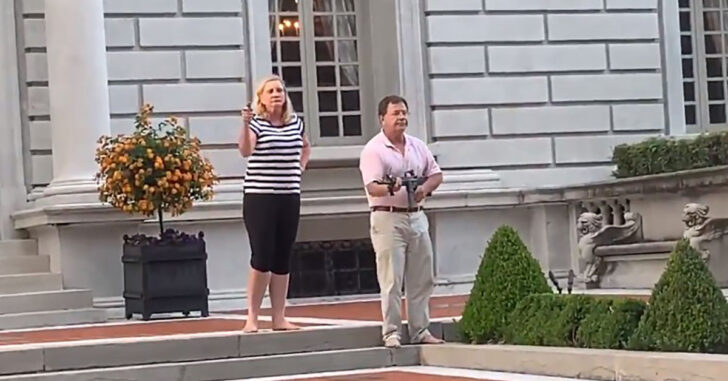 Late last month, a couple in Missouri made headlines worldwide after being shown on video confronting a large group of protesters who were inside their gated neighborhood.

Since then, a debate has been raging as to the legalities of what the couple did, with many on their side and many against.

Now, Missouri Governor Mike Parson says that a pardon is likely the outcome if charges are brought against the couple.

Missouri Gov. Mike Parson says he is prepared to exercise his pardon powers if prosecutors bring criminal charges in the case of a St. Louis couple who brandished firearms at a group of protesters outside their home.

Parson, a Republican, told a St. Louis radio station Friday that he thinks a pardon is “exactly what would happen” if Mark and Patricia McCloskey are hit with charges in the June 28 incident captured on video and seen by millions.

He later added that based on what he knows about the case, “I don’t think they’re going to spend any time in jail.”

The video below alone has been viewed over 16 million times as of this writing, and that’s just one of numerous copies floating around the internet.

A couple has come out of their house and is pointing guns at protesters in their neighborhood #StLouis #lydakrewson pic.twitter.com/ZJ8a553PAU

After all of this, it seems very unlikely that the couple will ever be spending any time in jail because of the incident.

What are your thoughts on the Governor’s statement?