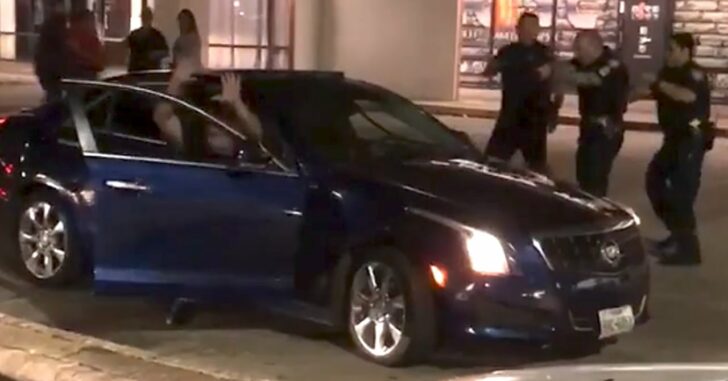 HOUSTON, TEXAS — When a fight broke out outside a bar at 2am last week, one man decided to drive his vehicle up to the front of the bar and open fire. When he did this, he didn’t know that three uniformed police officers were right around the corner.

A fight had broken out about 2 a.m., according to the Harris County Sheriff’s Office and Adrian Gonzalez, 27, fired his gun from his car in the direction of the bar.

Three off-duty deputies working security at the establishment headed out to the parking lot where they found the man still firing.

The deputies told the man to drop the weapon. When he did not, two deputies fired. The man was hit at least once. By the time EMS arrived, the man had died in the parking lot.

In the video, we can see what is assumed to be a passenger being taken out of the vehicle and sent to the ground by police at gunpoint. If this person were indeed the passenger, he’s lucky as hell to be alive, as he was in the direct line of fire from the officers.