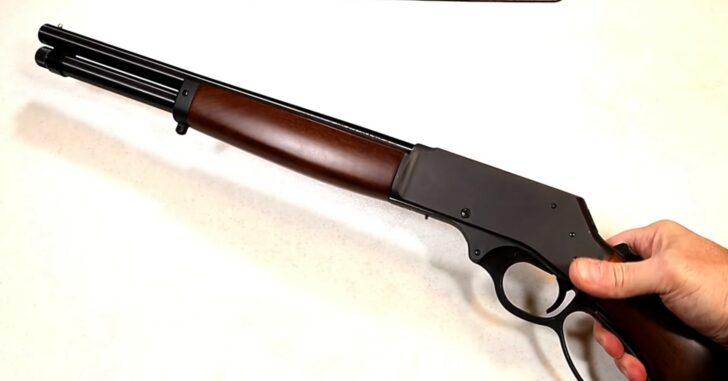 Henry Repeating Arms produces over 150 rifles and shotguns. They are well known for their excellent craftsmanship and beautifully functioning firearms. The vast majority of their rifle and shotgun line uses the reliable lever action. They mastered the lever action firearm and enjoy a fine reputation in the firearm industry. The Mare’s Leg Lever Action Pistols are three of their shorter firearms. These pistols are among the smallest and lightest in their vast line of firearms. Could they produce a similar model that fires a shot shell load?

A couple years ago, several firearm companies made big news when they created short pump-action firearms that fired 12 gauge shells. Many shooters considered these firearms great home defense guns. The power of a heavy 12 gauge load is devastating. The ability to maneuver around corners with half the size of a 12 gauge shotgun was attractive. They are classified as “Non-NFA Firearms” so several people lined up to get them.

Being smaller and lighter than a full-size shotgun, some people felt the recoil was too much to safely control a heavy 12 or 20 gauge load. But, what about the .410 shotgun load? Sure it’s a bit more expensive however it has low recoil even with the stronger defensive loads. There are several ammunition companies making vicious .410 hunting and self defense loads. Six years ago, I did a range review with .410 shot shells to determine if they could be successful for self defense. When I saw three shots of .410 turn a frozen milk jug of ice into crushed snow from eight yards, I got my answer.

Just recently, Henry Repeating Arms released their Non-NFA firearm called the Henry Lever Action Axe .410. It’s a beautiful lever action firearm that holds five 2.5 inch shells of .410 in the magazine tube. It has an overall length of 26.4 inches with a 15.1 inch barrel. Keeping consistent with Henry long guns, it uses beautiful American Walnut furniture that is stunning. The lever action is smooth and it has a side loading gate that make loading the firearm simple and convenient. It also allows the shooter to top off the firearm as the shots are fired.

The Henry Lever Action Axe uses a beaded brass front sight, a blued steel receiver that is drilled and tapped for a weaver rail, two swivel studs for a sling and the hammer action has a transfer bar safety. The smooth bore 15.1 inch barrel has a barrel clamp attached to the magazine tube and it ships with a full invector style choke for tighter shot spreads. It weighs just 5.75 pounds so it’s light enough for most adults in the house to use effectively.

I took the Henry Lever Action Axe to an indoor range to function check the firearm. It shot incredibly well. It could be shot with the arms extended and brought down to work the lever or continuous shooting from the hip. I used a combination of buckshot and pellet target loads. There was not a noticeable difference in the felt recoil with any of the shells I fired. It was manageable and a pleasure to shoot.

I know that many people use a .410 shot load to hunt small game like rabbits, squirrels and snakes. Others use it for self defense. I envision the Lever Action Axe to be a combination of those along with having a lot of fun target plinking at the range. The Henry quality and craftsmanship is seen and felt with every part of this firearm. The Lever Action Axe .410 would be a valuable piece in any gun lover’s collection.

The MSRP of the Henry Lever Action Axe .410 is $970 however a few of my viewers mentioned that they saw it at their local gun store for around $700. Do you feel this is a firearm that interests you? Watch the video attached and let us know your thoughts and experiences with this or any other Henry firearm.