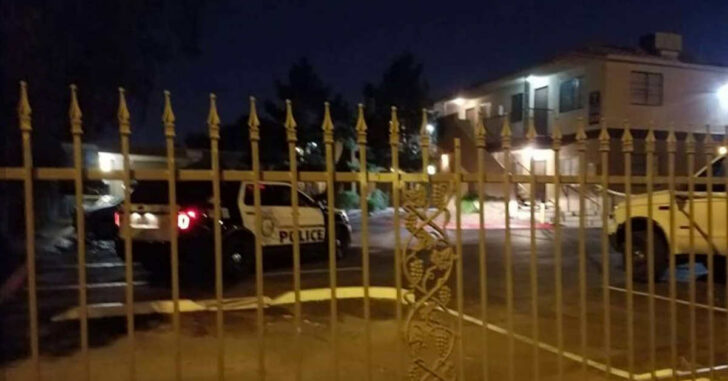 LAS VEGAS, NEVADA — When the occupant of an apartment heard a loud banging on his door, he got his gun. The door broke open and an unknown intruder entered his home. He shot the man and the man died at the scene. Metro Las Vegas police arrived to find him outside, being comforted by a friend. They asked him to drop his gun and he complied.

Upon inspection of the scene, police report they found signs of forced entry. As the Las Vegas Review-Journal reports, police are treating it as a self-defense incident. While police wonder why the intruder chose this apartment in particular, they have to concede the point that the occupant of the home was justified in using deadly force to defend himself.

It’s always been a point of curiosity for me why a criminal will choose one particular apartment in a building full of them. It could be he had an inkling there was something valuable inside or it could just be he was targeting the occupant himself. The speculation, on behalf of police, is somewhat unhelpful.

It is not important why a bad guy picks a home — it’s important that the person inside is prepared to defend himself. In this case, he had a gun and was prepared. He didn’t do anything silly like shooting through the door or a wall. He set himself up for success.

As for the intruder, he obviously never thought his choices through all the way. The act of smashing open a person’s door is loud. If that person has any capacity to defend himself, he will.

How did that intruder think it would work out? Would the occupant be so scared of the forceful entry that he forgot he had a gun?

Sadly, the answers to these questions will never be known because the intruder is dead. And as broken up about the situation as the occupant may be, it is a cold trail to work out the ‘why’ at this point.

Another bad guy taken out. Another law-abiding citizen defending his life thanks to a gun. It’s a tough day but good enough. Be prepared. Keep that gun nearby while you sleep. You never know who will try to pay an unwelcome visit while you slumber.

Previous article: BREAKING: Three Killed In Shooting Spree In California Next article: Thugs Invades Home, Has No Idea Who's Waiting Inside