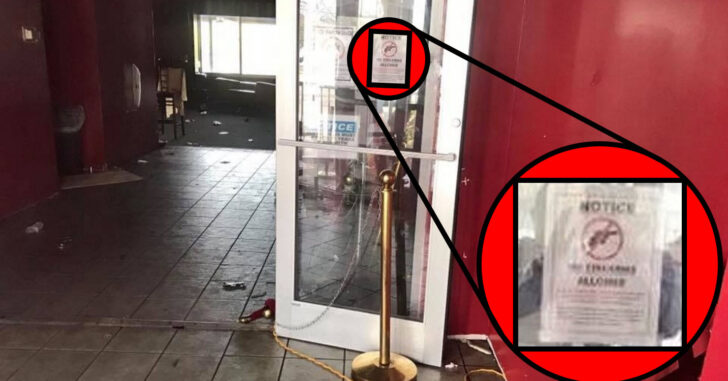 CINCINNATI, OHIO — With no arrests and one dead, a total of 16 people were injured inside a nightclub early Sunday morning. The shooting happened at Cameo nightclub in Cincinnati just after 1 am, and police believe that multiple people were responsible for firing the shots.

In a photo taken at the scene, seen above, the Gun Free Zone sign was of little influence to the multiple people who brought guns into the establishment.

Police say that numerous people at the bar got into an argument which eventually escalated into gunfire. The man who was killed, 27-year-old O’Bryan Spikes, was a father and college student who frequented the bar.

“There’s no reason that anyone should ever feel like they could go into a club, shoot a club up, because they’re upset with someone who disrespected them or otherwise hurt them earlier in the day,” Cincinnati Councilwoman Yvette Simpson said. “So I continue to say, yes, guns kill people, but people kill people.”

The club isn’t a stranger to violence, having experienced shootings in the past. That may be why the ‘No Guns’ sign hangs in the door, but we all know it’s just a piece of paper and a warning.

The club is even said to wand people as they enter, but somehow multiple firearms were still brought in.

Is it me, or do gun free zones simply not work?

Previous article: Child Shoots Self After Accessing Firearm In Purse: Why We're Responsible Next article: The Best Self-Defense Ammo, Voted by You, and One Takes Home 45% of the Vote