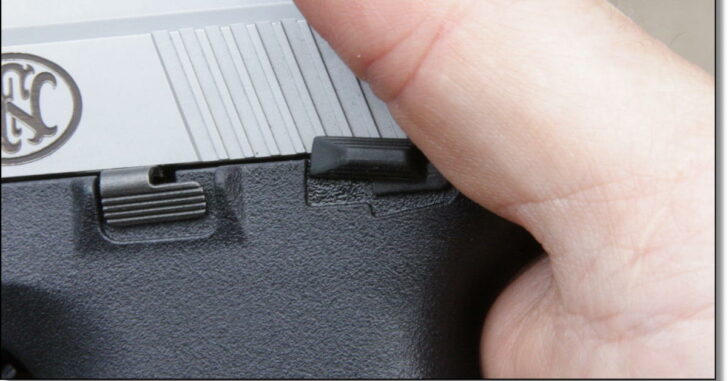 I don’t believe Glock produces any of its pistols with an external safety. Companies like Ruger and Smith & Wesson generally do have a model that features an external safety for each major line of their pistols. Springfield Armory’s XD Mod series features a lever on the handguard. By grasping the pistol, your hand squeezes the lever and this allows the gun to fire.

The Beretta 92FS, for example, has a selector switch that you have to flip in order for the gun to fire.

A: States like Massachusetts require a labyrinthine level of complexity in order for a handgun to be an approved for sale in its state. This often leads manufacturers to incorporate an external safety or an internal safety component so it can pass muster.

If you’re curious about what states like Massachusetts consider a safe handgun, kiss your endless insomnia goodbye and read their regulations here.

External Safeties Are No Replacement For Gun Safety

If any gun owner thinks an external firearm safety selector switch is a replacement for good trigger discipline and firearm safety principles, he is sorely mistaken. They are an additional engineered step designed to stop the shooter from firing a bullet. As such, when not required by law, it’s up to you to decide if that additional step is something you want. It cannot replace good common sense and safe firearm practices.

No matter if your gun has a selector switch or not, the absolute best way to ensure your gun is “on safe” is to keep it holstered properly. We wrote up two very great articles about how to choose a holster and different ways to carry concealed handguns.

What stops negligent discharges? The person carrying the gun.

Q: What about a dropped gun?

A: Dropping a modern firearm will not usually set it off. Trying to catch that falling handgun may. This is because all it takes is a finger to get stuck in the trigger well for the trigger to be inadvertently depressed and have it go off.

If your gun falls out of its holster or otherwise falls out of your control, it’s best to let it hit the ground. Do not try to grab it. Grabbing a falling gun can result in accidentally depressing the trigger.

This can result in some rather tragic incidences taking place.

If you’re worried about dropping a loaded handgun, you would do better to let it hit the ground.

Believe it or not, guns falling out of holsters DOES happen. It happened recently to a NH state representative. She allegedly swung her backpack off her back because she was running behind schedule and the backpack knocked her concealed handgun out of its holster.

The gun hit the ground, made a thud, and then she picked it up. She apologized profusely. Life moved on.

Is it dangerous to yourself and others? Well, it’s a loaded gun so there is the potential for very serious things to happen if it gets knocked out of a gun owner’s control. For modern firearms — even those without external safeties — they’re made to be dropped and not discharge.

During times such as these, it’s important to really analyze why the gun fell and take corrective actions to ensure it doesn’t happen again. We’ll cover that in a different article.

Another reason why people use external safeties is the idea that an external safety will stop a toddler or young child from accidentally firing the gun.

If you are worried about a young toddler or child gaining access to the gun, that’s an issue that requires education and proper handling. We’ve written a great article about educating family members about firearms. Please do check it out if you feel it may apply.

IT IS EASY to keep guns out of the hands of small children. It really is.

Most external safeties are usually just a switch or lever that, once moved, push the firearm from ‘safe’ to ‘fire’.  But we shouldn’t kid ourselves — no pun intended . A simple switch will not stop a toddler or young child from accidentally firing a round.

If you want to keep an unauthorized person from discharging one of your firearms, the best way to do that is to maintain control and accountability over all of your firearms.

Guns should be one of two places: physically on you or locked up. The great exception is when you’re sleeping and it just makes more sense to put a gun in the nightstand. Other than that, if you’re worried about someone else accessing your firearms without your permission, the only choice is to maintain 100% accountability over where they are at all times. That’s real safety.

The Panic Of Pulling The Trigger And Nothing Happening

If your everyday handgun has an external safety and you are in the situation where you are drawing your handgun to defend your life, you now have an extra step to consider before a bullet leaves the chamber.

External mechanical safeties cannot replace good, common sense. If it’s something you feel you need for your handgun, no one here will fault you a bit.

For those operating without an external safety, so long as you keep your finger off of the trigger and keep the gun holstered until you intend to use it, a loaded handgun is just as safe.

In conclusion (TL;DR), unless your state specifically requires you to purchase a pistol with an external safety (like Massachusetts), you do not need to have an external safety on your concealed carry pistol. If it is a step that you feel is a value-added experience to your concealed carry routine, please practice accordingly and always adhere to strict gun safety rules.

Previous article: Homeowner Shoots At Intruder, Tells The News, "We Want Our City Back. We're Sick And Tired Of Being Sick And Tired." Next article: At What Age Do You Put The Gun Down?