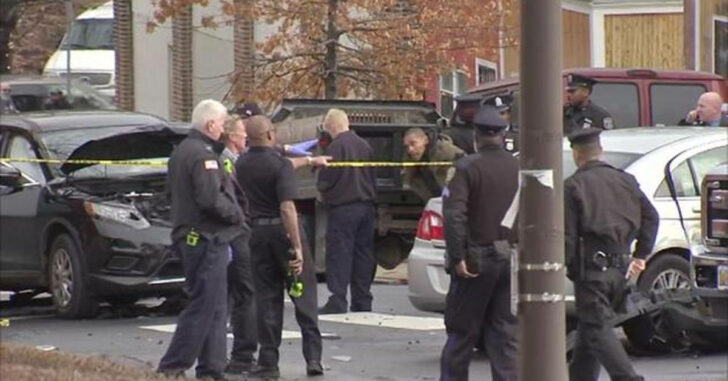 PHILADELPHIA, PENNSYLVANIA — The driver of a white Ford Taurus saw a man drive a Dodge Charger into the middle of an intersection and crash into other vehicles. That driver then got out and attempted to take over the man’s vehicle. The man kept his door closed, preventing the carjacking suspect from getting in. However, when the suspect saw an oncoming SEPTA (Southeastern Pennsylvania Transport Authority) vehicle, he decided to rip the driver out of that vehicle and take it over. He then proceeded to crash that vehicle into two other vehicles before returning to the man with the white Taurus.

According to 6 ABC Action News, the man had his handgun drawn at this point and was visibly ready to protect himself. The suspect, who’s name has not been released by police, grabbed the concealed carrier’s gun. That’s when the concealed carrier discharged the pistol and shot the carjacking suspect in the leg.

Philadelphia police arrived and arrested the suspect, bringing him to a nearby hospital for medical treatment. He is considered to be in stable condition and will live to see charges.

A similar situation played out in Atlanta recently. In that event, a man was fleeing from police when he crashed his hummer. He attempted to commandeer a nearby Porsche only to find that one of the occupants inside was armed. The suspect was shot once before police took him down and arrested him.

The amount of damage this one criminal managed to bring down upon so many people, it’s amazing that no one else was seriously hurt or killed. It’s that type of reckless behavior that can result in tragedy. If he was willing to walk up to a citizen with a gun and try to take the gun from him after wrecking almost seven vehicles, we can go out on a limb and say violence really doesn’t phase him.

That’s why being legally armed and carrying everyday is so important. This concealed carrier wasn’t looking for a fight. If anything, he tried to barricade himself in his vehicle so he wouldn’t have to fight the carjacker.

It became obvious that the criminal wasn’t going to stop. He wrecked a Dodge Charger, likely stolen, he stole a SEPTA vehicle — a felony right there — and he wrecked the vehicles that he either hit or ran into other parked cars.

We’re glad that concealed carrier got out alright. He won’t be facing any charges related to the shooting. Multiple witnesses came forth and testified about the events and police very quickly determined the man was acting in his own self-defense.

Crazy world. That’s why we need to carry everyday, everywhere.