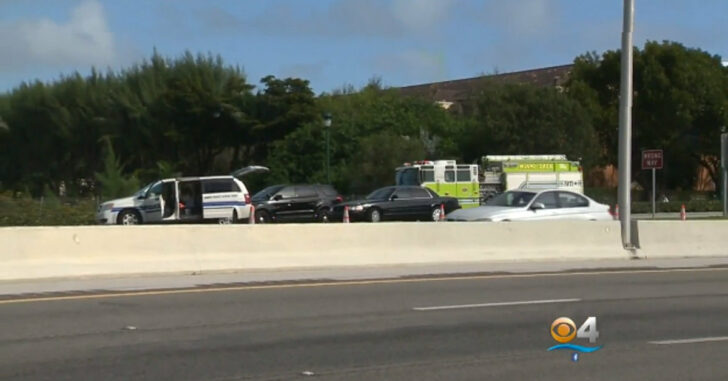 AVENTURA, FLORIDA — An Uber driver picked up a passenger at 5 a.m. to head to the airport. This is nothing new in the life of an Uber driver living outside Miami. Everyday these guys are responsible for getting people safely to and from the airport and other major destinations. However, today was different. Not only did he give his passenger a ride — he potentially saved his life as well.

According to CBS Miami, a gray van pulled in front of the Uber car as it entered the freeway. A man got out, armed with two guns, and attempted to commandeer the driver’s vehicle. Thankfully, the Uber driver was a properly licensed concealed carrier and was able to get his own handgun out and shoot the would-be carjacker.

When police arrived, they discovered the attempted carjacker was deceased and began taking witness testimony. Police concluded that this man used justifiable deadly force to defend himself. A District Attorney will likely make a final ruling but self-defense appears to be evident.

This was a situation that’s far outside the norm for most people but unfortunately, Uber drivers, delivery drivers, and plenty of business owners have to worry about some thug trying to commandeer their vehicle at gunpoint. It’s a real threat — especially if you drive a newer model vehicle.

That’s why concealed carry is so essential. Not only do you protect yourself, but you maintain the right to not be some idle victim in the event of a violent armed robbery. Bad guys don’t care what you lose — they just want your stuff. And they’ll take it by any means at their disposal. That’s why you have the responsibility to defend yourself. An everyday concealed carry handgun can do precisely that.

This guy followed the law, did what he was supposed to, and likely saved his own life in the process. As for his passenger in the backseat, he likely appreciated not being stuck in a vehicle with an armed bad guy.

Whether you’re an Uber driver, pizza delivery man, or just a concealed carrier who understands the value in protecting your life, carrying a concealed handgun every single day can truly save you. That’s why we promote carrying every single day, knowing the law, and ensuring you’re covered in the event of a defensive gun use scenario, covering your own hide.

Previous article: [VIDEO] Colt 1911A1 Has A Bad Wrap -- Is It Warranted? Vicker's Tactical Checks It Out Next article: Auto Repair Shop Owner Fights Back Against Would-Be Robber