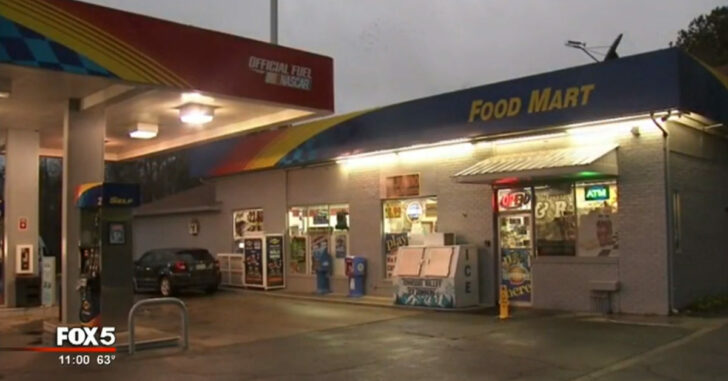 CARTERSVILLE, GEORGIA — Two armed robbers rushed into a store occupied by five other customers and a clerk. The clerk tried to retreat to the back room and push the door closed but, when the robbers were about to overpower him, he had no choice but to use his handgun.

“We were about a foot apart looking one another in the eyes. I knew he was fixing to start shooting, or I thought he was, so I reached around the door and shot him,” the clerk told FOX 5.

According to the clerk, he fired three times and the robbers fired four. After the initial exchange of gunfire, one of the robbers lay dead in the store and the other one fled the scene.

“We’re just thankful he’s okay and we just don’t tolerate people coming in and trying to take things from us,” said another clerk at the store.

When asked by FOX 5 News, the clerk commented that he didn’t have much of a choice. Both robbers entered the store and posed a severe violent risk to himself and others.

Regular customers appeared on the news segment and voiced their understanding for his actions. One claimed that had he been placed in the same situation, he would have acted the same way.

This is a great example of a clear risk to one’s own health and safety. If the clerk had not been willing to defend himself and others, they may have been shot or worse for trying to barricade and evade their assailants.

He gave these robbers every opportunity to leave peaceably but they chose the path of violence. There’s nothing left to do after that but fight back or be a victim. Your life isn’t guaranteed either way.

I’m glad to see the customers and the clerk were able to make it out of this situation safely. It’s a hard call to make in the split seconds between seeing armed, masked men enter the front door and willingly engaging a firearm. When your life is on the line, however, you’ll do whatever it takes to preserve it — even if that means using your handgun to fight back.