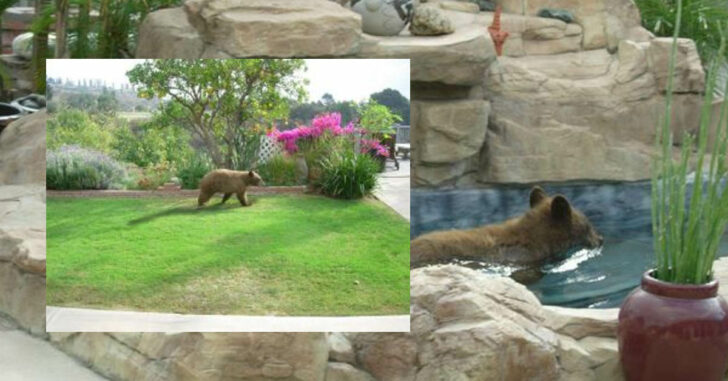 LA VERNE, CALIFORNIA — A wounded black bear is still on the loose after an encounter in the San Gabriel Mountains with an off-duty deputy with his young children. As the family exited their vehicle in the driveway of an unincorporated part of the town, they discovered three black bears eating from trashcans. One of the black bears turned and charged towards the family. The off-duty deputy did the only thing he knew would work — he fought back with his gun.

“Fearing for his life, and the lives of his children, the deputy fired several rounds from a handgun toward the bear,” the release stated.

The bear was wounded and retreated, alongside the other two bears. California Department of Fish and Wildlife personnel arrived on scene and attempted to track down the wounded animal but were unsuccessful.

One resident responded by saying that bear encounters were not at all uncommon in the area.

“It’s not alarming to hear that there are bears here. In fact, we go outside and sometimes we come face to face with a bear,” George Keeler said. “We’re not scared of them; we keep our respectful distance, but sometimes we think we need bear-proof trash cans up here.”

The big difference in this scenario is that a black bear charged. This can easily be interpreted as a threat. The off-duty officer, in the interest of protecting his children, used his gun to defend them.

People often look at bears as these cute, cuddly, dangerous animals. They don’t look particularly mean but can be downright vicious if the situation permits. It only takes one bear mauling to drive home that point.

Because people have such a laissez faire approach to bears, they’re inevitably creating the conditions for those bears to become dependent upon their trash.

People have weekend homes or vacation rentals up in the San Gabriel mountains. While scenic and beautiful, they often forget to lock up their trash — or never bother locking up their trash in the first place. This attracts bears. Bears are creatures of habit. If they get a free meal once, they’ll show up again expecting another free meal. Sooner or later, you wind up with bears ransacking the neighborhood looking for trash.

It’s a crappy situation that ends up with a black bear not getting his fill and seeing a person show up and think he’s threatening his trash territory.

That’s when wildlife gets shot or a person gets seriously injured. There’s no other way around it.

People love building their cabins and homes up in the middle of the wilderness because it’s beautiful, remote, and relaxing. But there’s a real stewardship that comes with living in the wilderness. We have to be responsible and make sure our homes are not attractive to wildlife — whether it be deer, elk, or bear.

But that’s a discussion meant for people outside of this situation. As for this off-duty deputy, he did what he had to do to defend his family. We’re not going to argue the details surrounding that because they speak for themselves. No one wants to risk their own family on behalf of some bear who wrongly decided he owned the roost.

Previous article: Uber Driver Forced To Defend His Own Life As Well As His Passenger's After Attempted Carjacking -- Why We Carry Everyday! Next article: Brother Stops Two Armed Bad Guys From Assaulting His Sibling In The Kitchen