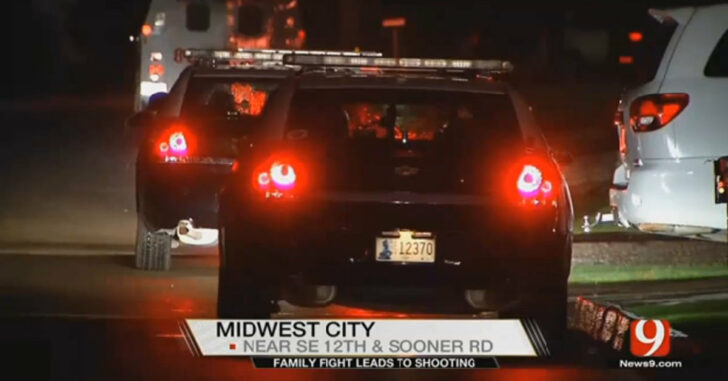 MIDWEST CITY, OKLAHOMA — Police investigated a shooting inside a man’s home after a fight broke out between him and his son. There was a woman at the house as well and she was shot in the leg during the altercation. The son was shot in the back.

According to Oklahoma’s Own News 9, investigators believe the father was acting in self-defense. The fight occurred around 2 a.m. — the witching hour for bars and plenty of drinking establishments. Little is known as to the cause of the fight or any information concerning the status of the son or the woman in the home. Both were injured by gunfire.

We do understand that a person’s home is indisputably his or her own. Once tempers flare, the other party needs to recognize the situation and depart the premises. Nothing good comes of a fight occurring inside another person’s home — family or otherwise. Family members have the right to defend themselves by any means necessary and, unfortunately, one of those means can be deadly force.

Family fights are harder to de-escalate than when tempers flare between strangers because there’s a bond and a background with each other. Each person knows what buttons to press and may believe there’s more leeway to act aggressively or violently than there ought to be.

We hate seeing family get shot. It’s a center cornerstone in self defense: self, family, and property. Unfortunately, not everyone gets along like that. And an adult male walking into his father’s home with the expectation he can just haul off and start bad stuff is both immature and idiotic.

We’ve had to report on family fights in the past and, surprise, surprise, law enforcement tends to side with whomever owns the home and has a legal right to be there. If that’s you, great. If it’s not you, perhaps it’s time to call it a night, sleep it off, and start fresh in the morning.

Previous article: Now That's Teamwork! Couple Held Up In Their Own Driveway, Wife Slips Husband A Gun Next article: We've Teamed Up With Alien Gear Holsters To Bring You An Exclusive Holster Just For Concealed Nation Fans