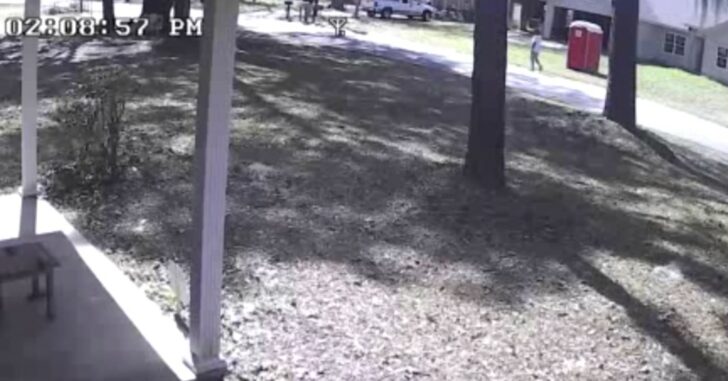 A few days ago, two arrests were made for the murder of 25-year-old Ahmaud Arbery, who was shot and killed in February by a father and son who thought he was a burglary suspect. Arbery had been out for a run, and fit the description of someone they were looking for, according to police.

On Wednesday, the Georgia Bureau of Investigation (GBI) said Gregory McMichaels, a former law enforcement official, and his son, Travis McMichaels, were arrested in connection with the February 23 shooting of Ahmaud Arbery.

A cell phone video was released last week that went viral on the internet, showing the moments leading up to the shooting, as well as the shooting itself. That video and information can be seen here.

Now, a home surveillance video has emerged that apparently shows Arbery walking into a home that’s under construction during his run, just a few minutes before he was shot and killed.

This new video, according to his family’s attorney, proves that Arbery did nothing wrong leading up to the shooting.

“Ahmaud did not take anything from the construction site. He did not cause any damage to the property,” the attorneys said. “He remained for a brief period of time and was not instructed by anyone to leave but rather left on his own accord to continue his jog. Ahmaud’s actions at this empty home under construction were in no way a felony under Georgia law.”

The newly released video is posted below.

The father and son, Gregory and Travis McMichael, are currently sitting in jail on murder charges.

Arbery was just 2 miles from his home, and his family says that he was a very active person who would go on long runs often to stay in shape.