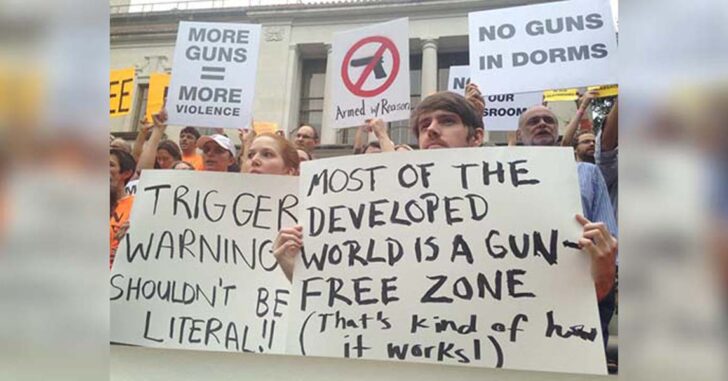 As you’re probably aware, Texas’s new campus carry law has caused some sturm und drangamongst the compassionate class who mold minds full of mush on the state’s publicly funded campuses. Efforts to split the civil rights baby while staying in compliance with the law (and, not incidentally, maintaining the funding flow from a very pro-carry legislature) haven’t please anyone really.

Now, as the fall semester approaches, there’s this:

Three University of Texas professors have filed a federal lawsuit to halt a state law that would allow holders of concealed handgun licenses to bring pistols into classrooms, saying the measure would have a devastating effect on academic discourse.

The lawsuit, filed in U.S. district court in Austin on Wednesday, comes just weeks before the law takes effect on Aug. 1. It allows license holders 21 and older to bring handguns into classrooms and buildings throughout the University of Texas system, one of the nation’s largest, with an enrollment of more than 214,000 students.

The legal argument the plaintiffs hang their case on revolves around their First Amendment rights:

“Compelling professors at a public university to allow, without any limitation or restriction, students to carry concealed guns in their classrooms chills their First Amendment rights to academic freedom,” according to the lawsuit, whose defendants include the state’s attorney general, the school’s president and university’s board of regents.

Reuters is quick to remind readers that,

The Texas law takes effect on the 50th anniversary of one of the deadliest U.S. gun incidents on a U.S. college campus: student Charles Whitman killed 16 people by firing from a perch atop the clock tower at the University of Texas at Austin.

The defendants — who include include Texas attorney general Ken Paxton, the school’s president Greg Fenves and university’s board of regents — say they’re reviewing the suit.