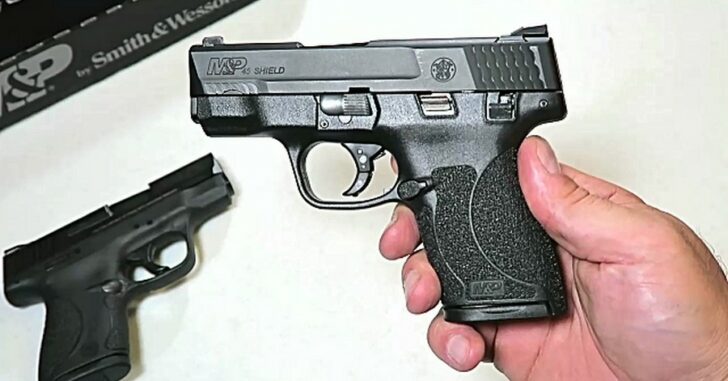 At the NRA convention this year, Smith & Wesson introduced a new pistol to their line of M&P firearms. They showcased a slightly larger M&P Shield in .45 acp. Immediately, the CCW world was buzzing about the new 45 Shield due to it’s larger caliber offering which excites “big bore” guys along with the popularity of the M&P Shield in 9mm and .40 S&W. After viewing and handling the new M&P 45 Shield, the main question was, when would it be released? Die hard M&P Shield fans liked the changes S&W did with the 45 Shield and looked forward to calling it their new CCW handgun.

I had an opportunity to get my hands on the new M&P 45 Shield and so far I have to admit, S&W did a nice job with it. It resembles many of the qualities of the original Shield however a few changes were made that sets it apart. The texturing of the grip is much more aggressive and they added low cut front serrations to the slide. Other than those initial changes, this handgun is all M&P Shield.

I picked up the 45 Shield from a dealer on gunbroker for a little over the MSRP price of $479. When I called around to my local gun stores, the 45 Shield was not available and one guy said they wouldn’t be available until mid next year. I knew they were hard to come by so I figured the only way I could get a 45 Shield was on gunbroker in which there were only three available. I am sure over time they will become more available for a cheaper price much like the Shield in 9mm was a couple years ago. The main feature that one will notice right away is the texturing on the grip. S&W decided the additional recoil of the .45 acp would require a better purchase on the gun. The stippling has a gritty feel to it around the entire grip including the grip panel in which the original Shield has a smooth grip panel. The 45 Shield is shipped in a cardboard box and comes with instructions, a cable lock and two magazines. The six plus one mag sits flush with the bottom of the grip which will allow for a two and a half finger grip on the gun. The seven plus one mag with an extended baseplate allows for a full three finger grip which helps with stability and control. I noticed the mag springs to be very tight. So tight that I had to use my mag loader to fill the entire mag. I am sure the mag spring will loosen up over time but out of the box, it is very tight. The magazine followers are orange which will help an owner of several Shields distinguish the difference between the magazines. The trigger on the 45 Shield feels the same to me as the 9mm Shield. It is a hinged trigger with a nice break. The reset is not quite to full position which helps for quick followup shots and double taps. My trigger gauge measured the trigger pull at 5.5 pounds. I heard other reviewers state that the trigger felt better with the 45 Shield than the other Shields but I didn’t notice a difference.

For those wondering about the size difference between the original Shield and the new 45 Shield can rest assured the differences are not that great. Compared to the 9mm Shield, the 45 Shield is about a half inch longer on the slide and half inch longer on the grip. The weight of a fully loaded 9mm Shield with seven rounds is 23.75 ounces and the weight of a fully loaded 45 Shield with six rounds is 27.25 ounces. Disassembling the 45 Shield requires no tools and is a simple process. Once the magazine is removed with no ammunition around, simply lock the slide back and push down the take down lever. Point the gun in a safe direction and pull the trigger to release the slide from the frame. Then remove the dual recoil spring and the 3.3 inch barrel from the slide. Reassembling is simply performing the same steps in reverse order with the exception of having to pull the trigger.

My shooting impressions of the 45 Shield were positive. The recoil was manageable and the 3­dot sights worked well when acquiring the target. At first, I shot low but some simple adjustments corrected that without issue. I ran through a couple boxes of Remington UMC .45 acp without any failures of any kind.

Overall, I think S&W did a nice job with the 45 Shield. They were able to incorporate the quality features of the 9mm and .40 Shield and add them to the .45 model. I really like the way they added texturing to the grip while keeping a slim profile for easy concealed carry. They kept the weight down without sacrificing increased recoil as the gun fired well and on target without too much punch back. I think the many Shield fans will enjoy the 45 Shield as their CCW handgun.