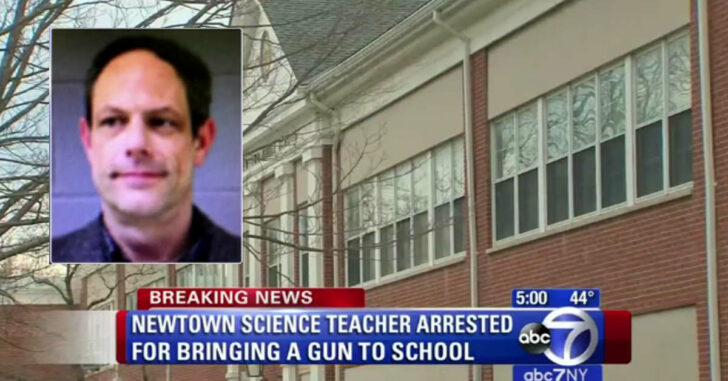 NEWTOWN, CONNECTICUT — A 46-year-old science teacher was spotted with a holstered concealed handgun by a school security guard and was then detained by Newtown police. The teacher did produce his valid concealed carry permit but he is being charged for carrying it into a place he his prohibited from doing so by state law.

The school district released a statement, saying “This matter is very serious and troubling, both the Newtown Public School system and the Newtown Police Department took immediate steps to address the matter. The teacher was immediately detained by security personnel.”

The science teacher was placed on administrative leave following his arrest and release. While it’s unknown his motivations for doing so, one thing we have to realize is that different places view guns differently. In many states across the nation, state law dictates who can carry into schools. School districts in Ohio and even one region of California are experimenting with placing highly trained teachers and faculty with concealed carry handguns into the classroom as a first response to a potential attack. However, in Connecticut, it’s highly doubtful they’re likely to do that any time soon.

In the meantime, we have to realize that even with the best of intentions, if our actions run akimbo of the laws of the land, we will likely encounter problems. Going into places that specifically prohibit firearms is opening up that concealed carrier to potential litigation and worse.

While it would be absolutely awesome if school systems and other places had a common sense approach to allowing teachers and faculty the legal right to protect themselves and their students, we’re not there, yet. And in places like Connecticut, it’s a sore reminder when someone acts out of line.

Carrying concealed with a permit also means abiding the conditions of that permit. While no criminal in the world will likely give a care of where a “gun free” zone is located, we’re in the unenviable position of abiding those restrictions.

No one should have to worry about the safety of their children while inside a school. However, because we live in a real world with real problems, a close second to that would be the thought that there’s a teacher or faculty member in the classroom who’s willing, ready, and properly trained to try to help. Unfortunately, for people in Connecticut that may not understand “the only thing stopping a bad guy with a gun is a good guy with one”, they’re likely to come down pretty hard on this science teacher no matter his intentions.