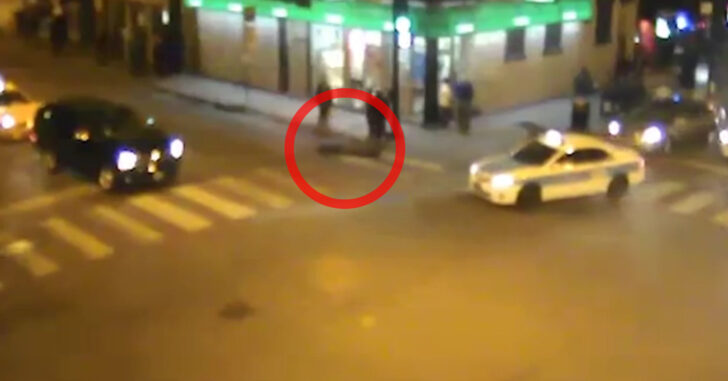 Don’t worry, bystanders, the man lying in the street unconscious can fend for himself.

Part ‘why I carry’ and part ‘disgraceful humans’, a man died after being knocked unconscious and robbed in the street after exiting a 7-Eleven, and was then run over by a cab driver who apparently did not see him lying in the street. He later died at the hospital.

The worst part, possibly, is that he was allowed to be run over since no one was catering to his obvious needs as an unconscious individual.

The ‘why I carry’ part is obvious, and the thug(s) responsible for the attack are still on the loose. Being that this happened in Chicago, who knows if 32-year-old Marques Gaines would have even been granted his right to bear arms had he chosen to do so.

As for the bystanders, I get how people who didn’t see what happened would possibly not want to be involved, but what about the folks who were there when it did? At first, we see a few people run up to the victim to check on his condition, but then soon leave him in the street alone. Many others walk by like it’s a common occurrence and seem to pay little attention to Gaines.

If I were ever faced with such a threat I would hope that A) I was able to successfully defend myself against the attacker and B) if I wasn’t, would also hope that people in the immediate area would come to some sort of aid… instead of calling 911 from a distance.

Maybe stand next to him and wave your arms to alert drivers? Just a thought.

In the end, in some locations, you’re on your own.

Previous article: Why Situational Awareness Is Important: Concealed Carrier Shoots At Robber #1, Then Gets Gun Stolen By Robber #2 Next article: How To Get The Most Out Of Your 9mm