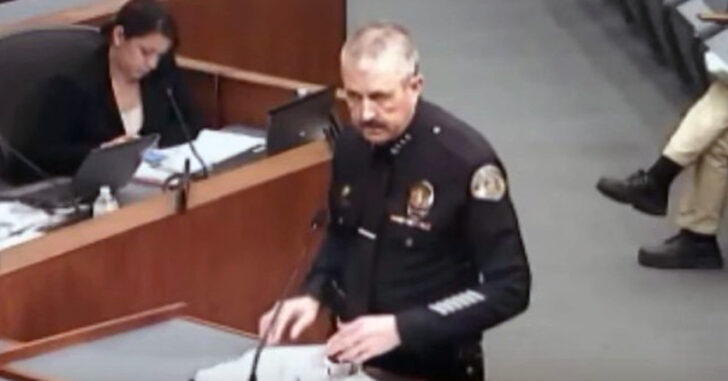 WEST COVINA, CALIFORNIA — Chief David Faulkner of the West Covina Police Department was called before the council members at a city council meeting to discuss why Second Amendment rights in West Covina were being unilaterally stopped.

Chief Faulkner did everyone the dubious honor of appearing before the council and giving his explanation for the “good cause” required for a West Covina resident to pursue a concealed carry permit.

“From 1978 to 2011, there have been sixteen CCW applications made and no permits issued during that time period.”

“Is protecting your family a good enough reason,” asked one councilman. “I mean, after you go through all the training. Because there is training involved, isn’t there?”

“In this particular case, I can read you what I use for good cause, if you’d like?”

Clear or convincing evidence of a clear and present danger to life or of great bodily injury to the applicant, his or her spouse, or dependent child, which can not be adequately dealt with by existing law enforcement resources and in which danger can not be reasonably avoided by alternative measures and which danger would be significantly mitigated by the applicant carrying a concealed firearm.

The councilman then asked if “protecting your family” qualified as a just cause to pursue a concealed carry application and the chief of police answered that it didn’t.

This is where the councilman finally takes his issue before the city and addresses both the chief of police and the audience.

“We have a situation in West Covina, and in California, where our constitutional rights and our ability to protect our families is limited based upon our zip code.”

This video is an excellent demonstration of both city residents and politicians calling those who have blocked gun rights to task for their decisions. In every city and town across the United States where the Second Amendment is being unconstitutionally limited by de facto dictators masquerading as county and municipal officials, people need to see this video and learn how they, too, can go about shifting the balance of power.

Self defense is an inalienable right and it requires no just cause. There is a process to obtaining a concealed carry permit and it usually includes training and background checks unless you live in a constitutional carry state. After those two caveats are completed, there should be no need to supply evidence that you are in danger. When you are in danger, that evidence will have already presented itself and often times too late for anyone to do anything about it.

Watch this video and let’s discuss some more about how citizens can reshape the discussion about gun rights in their town.