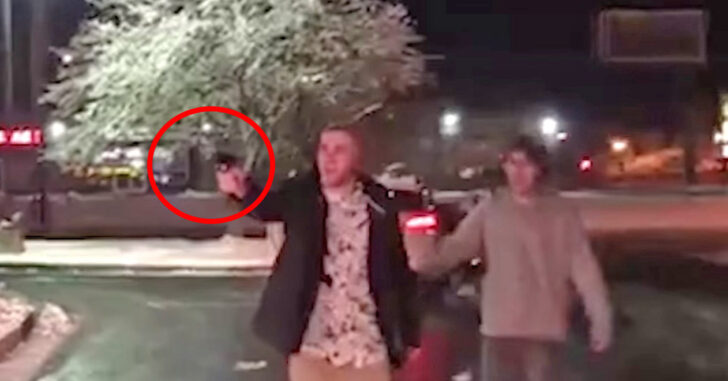 MURRAY, UTAH — A heated argument at a McDonald’s drive-thru almost turned deadly when a man pulled a gun on the staff.

The incident was caught on video by another car in the drive-thru. The customers weren’t too happy about paying the extra money, and got out of their car to yell profanities at the McDonald’s staff. In trying to intimidate the staff, one of the men walks over and pulls out the gun, pointing it at the drive-thru window.

Realizing that was going too far, the man’s friend grabs him and walks him back to the car, before things escalate further. It was almost over, but a person from a neighboring car ran out to record the commotion on a phone, which the man with the gun didn’t appreciate. The man pulled out the gun again and pointed it at the other customers in the drive-thru line, before eventually getting back in his car and driving away with his buddies.

The police have identified the license plates of the white Subaru Outback the men were driving, but currently no arrests have been made.

As a concealed carrier, I watch videos like these very closely and try to make a determination as to what I would have done if I were in a situation like this. While I wouldn’t be screaming “WORLD STAR ALL DAY!” like the guy behind the camera, I could find myself an innocent bystander to an altercation such as this, and it’s important to walk through the scenarios to decide what I’d do.

So, what’s an appropriate response? Clearly there is a threat if a person pulls out a firearm and points it at someone else. This can be seen in the video on multiple occasions. First, the firearm is pointed at the staff in the drive-thru window, and then again on the bright young lad who decides to talk towards the guy with the gun and starts filming.

If you’re an innocent bystander –not provoking altercation or escalating the situation– and see a firearm pointed in your direction or the direction of someone else, it seems fitting to ultimately make a decision to draw your own firearm. It also seems fitting to GTFO as quickly as possible, which I likely would have done before the firearm was even pulled out by the young, wannabe thug.

So who’s to say, really. Again, I would have probably gotten myself a safe distance away from the altercation before it turned more serious than it was and if I drew my firearm prior to his display of a firearm, that’d be jumping the gun and unnecessary.

So in my case, the point seems to be moot because I wouldn’t have stuck around to see the gun anyway.

For argument sake, if I had stuck around to watch events unfold (while calling the police) and found myself staring down the barrel of a pistol, the game changes dramatically. First you take cover, then you try to get away. If the guy advances on you, like this guy did when he got close to the vehicle, I’d likely be pointing back at him. Would I fire? I honestly don’t know. But if I did, I don’t see the DA filing charges.