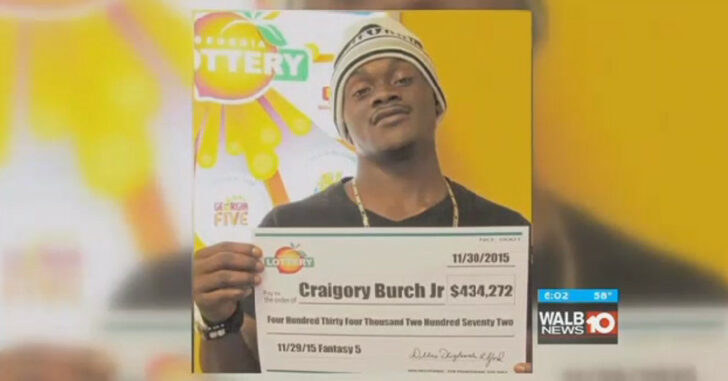 FITZGERALD, GA — The sweeping glory of fortune was quickly squelched out for one lottery winner after he was summarily invaded and shot to death in his own home.  The (un)lucky gentleman was a forklift operate who, according to WALB 10, won an estimated half a million dollars (before taxes) back in November.  His mug was put up all over the news as, obviously, there’s quite a bit of excitement surrounding someone who wins the lottery.  The 20-year-old homeowner was invaded in late January where he was shot to death, pleading for his life.  Obviously, someone recognized his face from the news.  Georgia Bureau of Investigation (GBI) said that three armed robbers entered the house via shotgun blast to the front door.

The victim threw his pants to the robbers, who allegedly went through his pants but couldn’t locate his wallet.  Apparently, their patience wore thin and before departing, they fatally shot him.  His girlfriend ran for help.

Keep in mind, this occurred nearly two months after the guy won the lottery.  Nobody knew who did it but it’s pretty blatantly clear that someone connected with this story knew this guy won the lottery.  Whether that person was there for the commission of the crime or not doesn’t matter.  People get stupid when a lot of money is up for grabs.  These guys were also idiots because even if they had gotten a bank card, there’s absolutely no way they could have gotten out even a fraction of the money before a BIG paper trail was formed.  At present, the Georgia Bureau of Investigation doesn’t seem to have very many promising leads.

If you’re a concealed carrier and your luck goes right for a change, keep that quiet.  While everyone may pretend to be so happy for you, you never know who amongst them is actually plotting on how they plan to get a piece of it.

Also, whether you won the lottery or not, if you’re home on the couch — keep your gun on you.  Blowing open the entrance with a shotgun blast is pretty impressive.  But if you turn that doorway into a kill zone with some well placed shots, you’ll be surprised how quickly the will of hoods will break.  And if it doesn’t, well, at least they’ll have to work a lot harder for their meal.