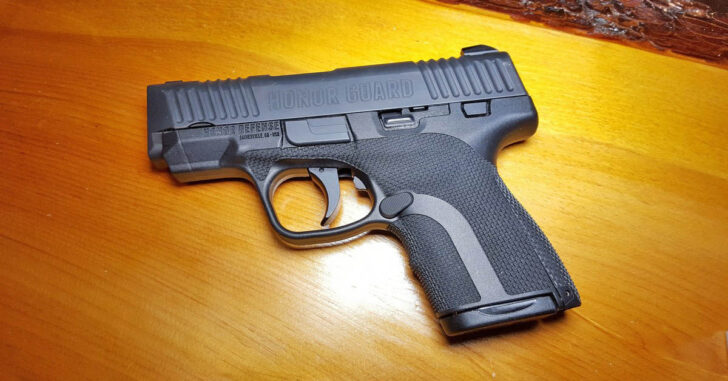 Back in November of last year, I was at an event in Austin that introduced us to many companies in the industry. While meeting everyone in a round robin-style setup, I walked up to the next table and met Gary Ramey, President of Honor Defense LLC. He had some pistols sitting on the table, so I picked one up and took a look.

I told Gary that I’ve never heard of Honor Defense, and there was a good reason for that. He informed me that the company was new, and this was their first pistol out of the gate.

I immediately took note of how… close to perfect it was. The slide had an extremely smooth pull, the trigger was great, the grip texture felt as though it’d get the operator through any situation. I couldn’t wait to try it out at the range.

And try I did. I kept circling back to his table, using up a considerable amount of his ammo. I just couldn’t get enough of this firearm.

The Honor Guard by Honor Defense.

Chambered in 9mm, the Honor Guard has something for everyone. While it’s made for concealed carry, I have no doubt that it will appeal to a larger crowd. Let’s get into some details.

This 9mm is sized to be the perfect carry companion. Weighing just 22 ounces with a 3.2″ barrel and 4.6″ in height, this is the perfect CCW pistol.

– Ambidextrous slide catch to fit everyone

– Ambidextrous magazine release to fit everyone Taking a look at the overall design, it brings elegance together with simplicity. It sports ambidextrous everything, which will obviously appeal to both left and right-handed shooters. Even the slide stop is ambidextrous, a feature not found on most pistols.

If you look closely at the above image, you’ll notice that they extended the stippling of the grip all the way to the front where the user’s thumb may reside when shooting. This addition was not overlooked, and was pretty noticeable at the range. The front sight gives the user a bright orange dot, great for low light scenarios. The target acquisition is quick and painless, and the front orange dot is paired with two rear white dots that sit on a dovetail sight. Slide serrations are found on both front and back, a feature that I typically look for in a pistol. The serrations are smooth and refined, allowing a solid grip on the slide when manipulating it, while not destroying your fingers. Let’s be honest; some serrations are down-right brutal if you happen to grab them the wrong way. This design negates that, and they still do what they’re supposed to do. If you’re looking for concealed perfection, this pistol is in your rear-view mirror and it’s gaining fast, so you’d better be paying attention. The profile is slim, and the way everything was put together offers very little ‘catch locations’. Translation; they took extra care to keep everything as close to the frame and slide as possible, so nothing really sticks out that could potentially get caught up on clothing or other obstacles in the way while drawing.

It really is a great design, and it shows as soon as you pick it up and take a look. Each Honor Guard comes with an extended magazine in addition to the flush magazine. This extended mag gives you a full grip on the firearm, as well as an extra round of 9mm to carry around. The extension is comfortable, but I do wish the same texture on the grip was also found on the magazine sleeve. That way it’d be a uniform feel, but it’s still a great feel nonetheless. Now, about this texture. It’s simple and comfortable, and will do wonders if you find yourself with sweaty hands. It’s not overly abrasive, and never bothered me for the lengthy time that I’ve shot this pistol.

The placement, size, shape and texture of the magazine release is also… dare I say, perfection. You’re able to find it quickly without looking, and it drops the magazine each time with ease. Given the shape, it provides a natural ‘slide’ of the thumb to get to the mark and press down.

And unlike some pistols, the release actually ‘pops’ the magazine out, rather than simply unlocking it and then requiring the user to pull it out. The trigger is nice and crisp, and is honestly one of the nicest triggers I’ve encountered in a pistol. They took the time to get this –among other things– right. It just feels great, and there’s no guess as to when the trigger will break. It’s smooth, concise and reliable. For the all-American folks, this pistol is entirely made and assembled in the USA. Every last piece. While speaking with Gary, he told me they have no intention of ever changing this policy. It’s evident that keeping everything ‘in-house’ is important to them, and I couldn’t agree more. If you can, and I highly recommend that you do, get one of these in your hands and you’ll probably find yourself one of thousands who are going to immediately fall in love with this pistol.

The takeaway is this: Honor Defense hits the ball out of the park with their first line of concealed carry pistols. If they’ve done this well out of the gate, I absolutely cannot wait to see what they come up with next.